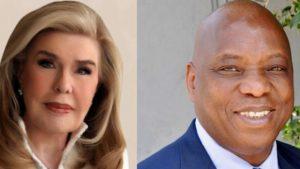 Guinean doctor Morissana Kouyate and Marianna Vardinoyannis of Greece are the winners of the 2020 Nelson Mandela Prize. The President of the United Nations General Assembly, Tijjani Muhammad-Bande has made the announcement of the winners of the award which recognizes persons who dedicate their lives to the service of humanity.

Kouyaté is a leading figure in efforts to end violence against women in Africa, including Female Genital Mutilation (FGM). He has received several international humanitarian awards for his work.

Vardinoyannis has been involved in the fight against childhood cancer for some 30 years and, thanks to her work, thousands of children have been cured.

The Nelson Mandela Prize, which is awarded every five years and recognizes those who dedicate their lives to the service of humanity, by promoting the purposes and principles of the United Nations, while honouring Nelson Mandela’s life, and legacy of reconciliation, political transition, and social transformation. The Mandela Prize was established by a UN General Assembly resolution in June 2014.