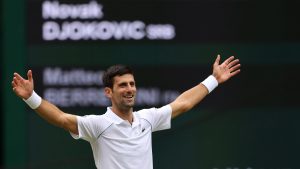 Novak Djokovic became the first player in history to win 80 matches in all four Grand Slams when he defeated Kwon Soon-woo 6-3, 3-6, 6-3, 6-4 on Centre Court his 80th win in Wimbledon. By virtue of his victory, the former world no.1 tennis players has created history winning his 80th match at the Wimbledon. The six-time champion has became the first male player in the Open Era to win 80 or more match at all four grand slams.

Number of matches won by Novak Djokovic at each Grand Slam:

The Serbian could become the joint-second most succesful male singles player at the world’s oldest grand slam as a seventh title will take him level with Pete Sampras’ tally and put him just one title behind Roger Federer.