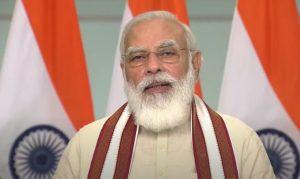 PM Modi also interacted with the beneficiaries from Dhar, Singrauli and Gwalior under PMAY-G in Madhya Pradesh. Building a house under PMAY-G takes about 125 days but during this period of Corona, it was completed in just about 45 to 60 days which is a record in itself.

Pradhan Mantri Awas Yojana–Gramin (PMAYG), earlier known as Indira Awaas Yojana (IAY), is a scheme for rural housing by the Indian Government. This social welfare program was initiated to meet the objectives of the “Housing for All” scheme by the year 2022.

The main aim of the PMAY-G scheme is to provide the pucca house with some of the basic amenities. This scheme is meant for people who do not own a house and people who live in kutcha houses or houses which are severely damaged. At present, the minimum size of the houses to be built under the PMAY-G scheme has been increased to 25 sq. mt. from 20 sq. mt.