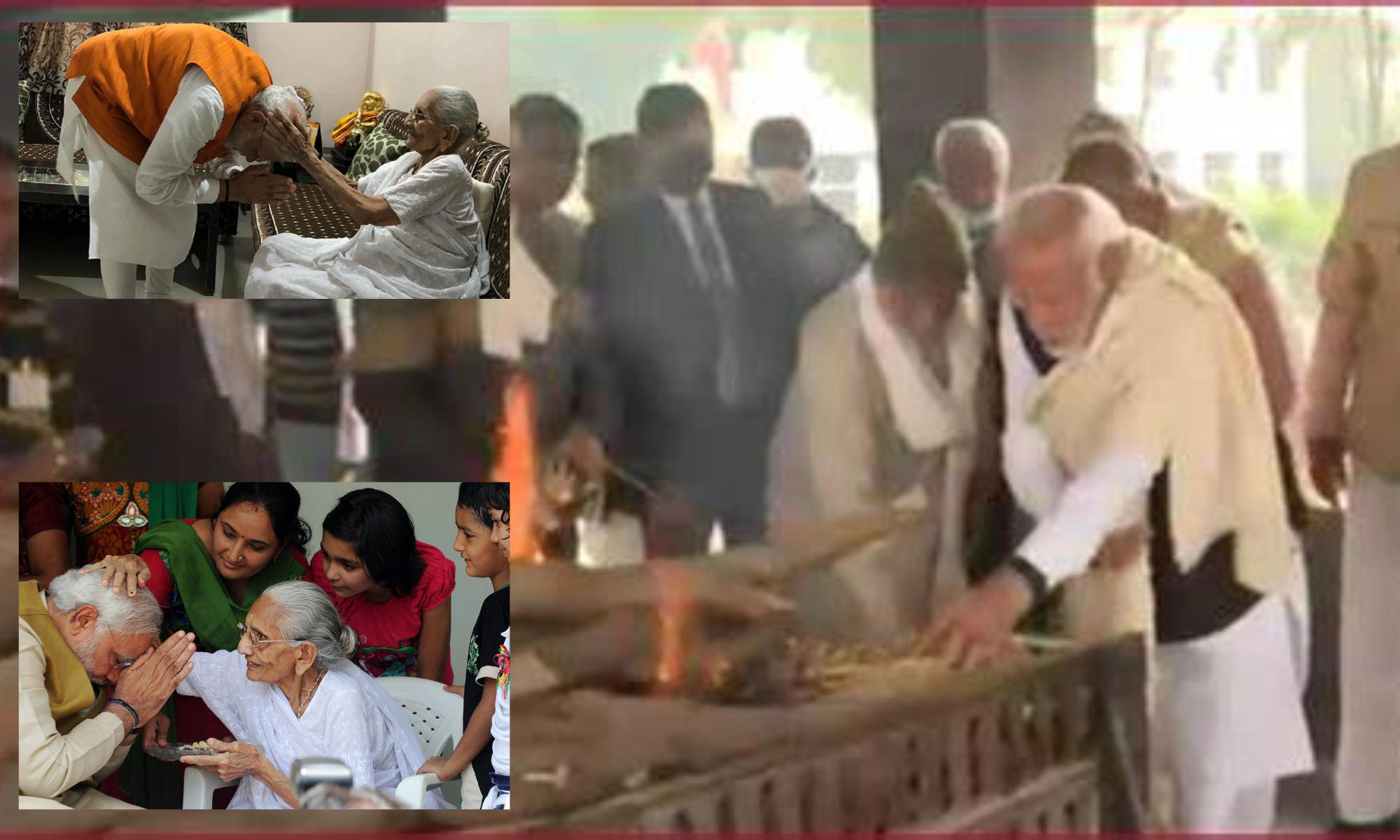 Heeraben Modi (Hiraben Modi), mother of Prime Minister Narendra Modi, passed away early on Friday (30 December 2023) in an Ahmedabad hospital. Heeraben was 99. The news of her passing was announced in a bulletin from the UN Mehta Institute of Cardiology and Research Centre, where she was taken on Wednesday when her condition began to deteriorate.

Several individuals accompanied PM Modi during the final rituals for his mother, Heeraben Modi, including Gujarat CM Bhupendra Patel. Along with his brother, PM Modi ignited the funeral pier.

Rahul Gandhi expressed his condolences for the passing of PM Modi’s mother, Heeraben, via Twitter. The news of Mrs. Hira Ba (Heeraben Modi), the mother of Prime Minister Narendra Modi, passing away is very distressing, Rahul Gandhi wrote in a tweet. I send him and his family my sincere condolences and affection during this trying time.

Sharad Pawar took to Twitter for giving his condolences on the demise of PM Modi’s mother Heeraben Modi and wrote:

“Narendra Bhai , I am deeply saddened to know about passing away of your mother. It’s an irreparable loss of a irreplaceable person in life ! Please accept my sincere condolences on her loss. May her soul rest in eternal peace.”

Narendra Bhai , I am deeply saddened to know about passing away of your mother. It’s an irreparable loss of a irreplaceable person in life ! Please accept my sincere condolences on her loss. May her soul rest in eternal peace.@narendramodi

We are saddened by the loss of Smt. Hira Ben ji, mother of the honourable Prime Minister Shri Narendra Modi. A mother’s passing is an unimaginable and irreparable loss. Nitish Kumar, the chief minister of Bihar, stated on Twitter that no one in the world can replace a mother.

Minister of Information and Broadcasting Anurag Thakur expressed his condolences for the passing of Prime Minister Narendra Modi’s mother Heeraben on Friday. He wrote,“Losing a mother is one of the deepest sorrows. But her goodness, care, wisdom, and love will always be with you. May God give the departed soul a place at his holy feet.”

On Friday, the chief minister of Andhra Pradesh and the governor of that state, Biswa Bhusan Harichandan, both expressed their sorrow on the passing of Hiraben Modi, the prime minister’s mother. He wrote, “I convey my heartfelt condolences to Prime Minister Sri Narendra Modi ji, and the bereaved family members and pray Lord Jagannath and Lord Venkateswara, to bless her soul to rest in peace.”

The chief minister of Uttar Pradesh also expressed his condolences on Twitter. “A mother is everything to a boy. For a son, the loss of a mother is indescribable and devastating. It is terribly unfortunate that Honorable Prime Minister Shri Narendra Modi’s esteemed mother has passed away. I pray that Lord Shri Ram would give the deceased person’s soul a seat at his holy feet.

Family of Heeraben Modi thanks everyone for their prayers

The family of Heeraben urges people to keep working because it will be a suitable tribute to him. Hiraben Modi, mother of Prime Minister Narendra Modi, passed away on Friday. Her family members have thanked everyone for their prayers and asked that everyone carry on with their regular schedules as it would be a suitable memorial to her.

We appreciate everyone’s prayers during these trying times, they said. We respectfully ask everyone to proceed with their pre-determined schedule and obligations while keeping the departed soul in mind. That would be a suitable memorial for Hiraba.