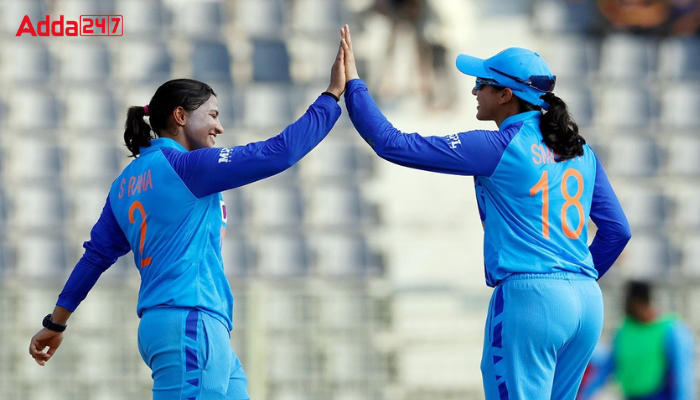 India defeated Sri Lanka by 8 wickets in the finals of the Women’s Asia Cup 2022. India has bagged the position for the 7th time. Sri Lanka won the toss and opted to bat first. Sri Lanka made 65 runs in 20 overs losing 10 wickets. India chased the target in 8.3 overs making 71 runs with a loss of only 2 wickets. Smriti Mandhana made 51 runs not out in 25 balls.

India vs Sri Lanka– Sri Lanka opted to bat first and Athapaththu and Anushka Sanjeewani came to bat first. Athapaththu made 6 runs in 12 balls and Anushka made 2 runs in 4 balls. Both the openers of Sri Lanka were run by Renuka Singh and Pooja Vastrakar respectively. O Ranasinghe made 13 runs in 20 balls and Ranaweera made 18 runs in 22 balls and was not out. Renuka Singh took three wickets against Sri Lanka by giving 5 runs only. Gayakwad and Sneh Rana took two wickets each causing Sri Lanka severe damage. Sri Lanka managed to make 65 runs in 20 overs by losing 9 wickets.

India came on the field in the second innings after Sri Lanka. India was required to chase a target of 66 in 20 overs. India opened with Shafali Verma and Smriti Mandhana. Smriti Mandhana made 51 runs in 25 balls not out. Harmanpreet Kaur made 11 runs in 14 balls. Shafali Verma and Jemimah Rodrigues were bowled by Ranaweera and Kavisha Dilhari respectively. India lost only two wickets. India chased the target in 8.3 overs making 71 runs.