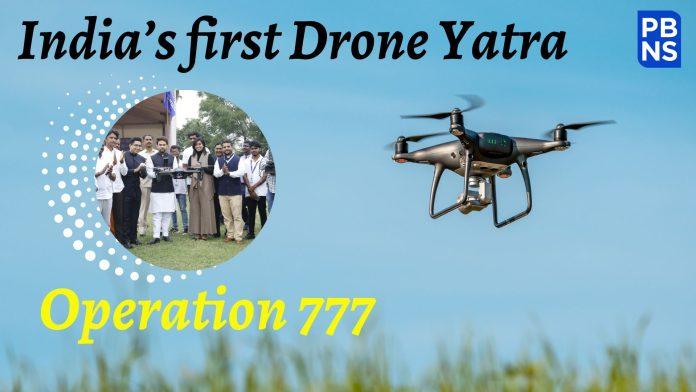 Towards empowering and mobilising farmers across the nation with the use of agri-drones, Information and Broadcasting Minister Anurag Singh Thakur inaugurated India’s first Drone Skilling and Training Virtual E-Learning Platform at the Chennai manufacturing facility of Garuda Aerospace, a drone-based startup of India.

The Minister, simultaneously flagged off Garuda Aerospace’s drone yatra, ‘Operation 777’ which will educate and demonstrate the efficacy of drones for different agricultural uses across 777 districts in India.

The I&B Minister also launched the first of 1000 planned Drone Centre of Excellence at the company’s Manufacturing unit in Chennai which is also the largest in India. To gain hands-on experience, and understand functionality and technology, he also flew a drone after a quick crash course.

What Has Been Said: Cutting-Edge Tech:

Agnishwar Jayaprakash, Founder & CEO of Garuda Aerospace said that the company is committed to create an ecosystem of information around drones and their implication is the agriculture sector of India, keeping farmer’s integration at the core. “The idea is to develop deep tech data analysis, where we can provide Agri advisory services back to the farmers,” said Jayprakash putting emphasis on developing a system wherein farmers can be advised on how better they can do farming in a smart and precise way in terms of yield productivity.