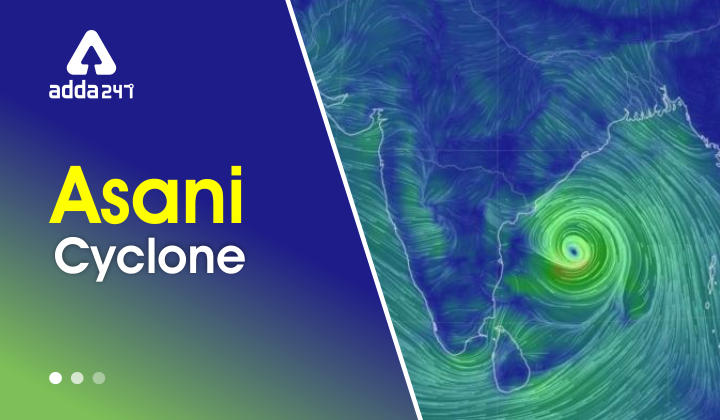 Asani cyclone is formed over the Southeastern part of the Bay of Bengal. It is an intensified cyclone storm that is likely to hit Orissa and Andhra Pradesh as per the Indian meteorological department (IMD). On Sunday evening the cyclone Asani intensified into a severe cyclonic storm that moved Northwest words in the direction of Andhra Pradesh and the Odisha coast. The Odisha Government has planned to evacuate people living in low-lying areas. The government has also asked the district collectors of Puri, Ganjam, kendrapara, and Jagatsinghpur to evacuate people to cyclone centers when the district starts to receive rainfall.

In Kolkata, the regional meteorological center announces that the state will receive moderate rainfall with thunderstorms and lightning. This could affect the eastern West Midnapore districts and people are advised to stay in safe places. Due to cyclone Asani, the chief minister Mamata Banerjee has postponed her 3 days program in Jhargram and Paschim Medinipur district.

Why the Cyclone is named Asani?

The cyclone has been named Asani, which in Sri Lankan local language, Sinhalese means “wrath”. It is the first cyclone of 2022 which originated from the Bay of Bengal. According to the world meteorological organization, the cyclones are named to avoid confusion in the instance where multiple systems are operating in one location. There are 6 regional specified meteorological centers all over the world and five regional tropical storm warning centers (RSMC), which are authorized to issue tropical cyclone advisory and the names of cyclones. The Indian meteorological department is one of the six RSMCs and advises countries in South and Southeast Asia like Bangladesh, Myanmar, Maldives, Oman, Pakistan, Qatar, Iran, Saudi Arabia, Sri Lanka, Thailand, UAE, and Yemen. IMD has compiled a list of 169 names that can be used for cyclone nomenclature in April 2020. 169 names are placed in to13 lists with each list consisting of at least one submission from every country. From this list so far nine names are used, Nisarga, Nivar, Gati, Burevi, Tauktae, Yaas, Shahid, Gulab, and Javed and next up is Asani.

1. What is the speed of Asani Storm?
Ans. The Asani Cyclonic storm has a speed of 25 km per hour and the winds are 120 km per hour.

2. Where did Cyclone Asani come from?
Ans. The Asani Cyclone has formed in the Bay of Bengal and it is moving towards the east coast.