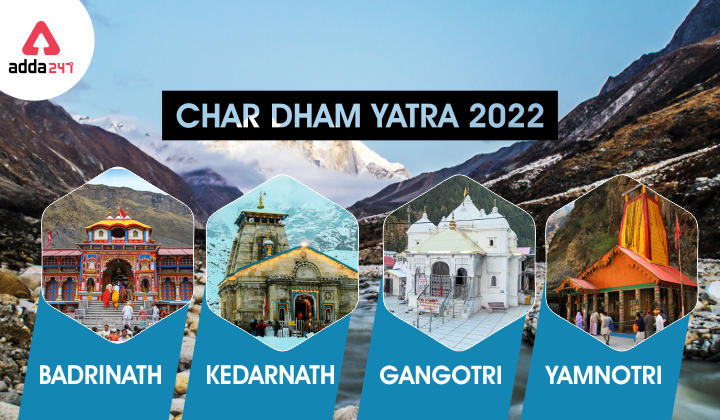 Char Dham is a pilgrimage site in India, the four Dhams are Badrinath, Kedarnath, Yamunotri, and Gangotri It is a well-known belief in Hindus that every Hindu should visit the char dhams once in his lifetime. All the dhams are related to four different epochs of the universe, Satyug, Tretayug, Dwaperyug, and Kalyug. Char Dham Yatra is like a ritual every citizen must complete in his or her lifetime. It is believed that char Dham yatra will bring you peace and will make your soul pure. It will take away all the evil out of your mind and body. People between the age of 50s-60s are most likely to go for Char Dham Yatra.

States And Capitals Of India 2022

Badrinath Dham is located in the Badrinath district of Uttarakhand, it is one of the four sides of the Chardham pilgrimage. The town Badrinath gets its name from the Badrinath temple. The Badrinath temple is the main attraction of the town. According to history, Sankara discovered a black stone image of Lord Badrinarayan which was made of Shaligram stone in the Alaknanda river. He took the stone and shine it in the caves near the Tapt Kund.

The king of Garhwal in the 16th century moved the Murti to the present temple of Badrinath. The architecture of the temple resembles a Buddhist temple and inside the mandapa, a large pillar hall leads to the Garbha Graha or the mean area of the shrine. There are a lot of stories related to Badrinath and one of the stories which describe the name of this place is, that the place was full of Badri bushes and Lord Vishnu used to meditate, and his below Lakshmi stood next to him and sheltered him from the scorching sunlight and turned herself into a Badri herself called Badri Vishal. Hence she was Badri and her lord or nath became the place of Badrinath. According to Jainism, numerous Jain Muni got moksha by doing Tapasya in the Himalayan ranges and hence this place is considered Holi in Jainism.

The temple was constructed by the Pandavas which is mentioned in Mahabharat. It can also be noted that Mahabharat does not mention any place called Kedarnath only one of the earliest references together does not occur in the Skanda Purana, which says that kedara is the place where Lord Shiva releases the holy water of Ganga from his matted hair resulting in the formation of Ganga river. Kedarnath is located 223 km away from Rishikesh in Uttarakhand. The place of interest in Kedarnath is a temple known as Bhairavnath temple where the deity Bhairavnath is believed to protect the town.

Gangotri Dham is located in the Uttarakashi district of Uttarakhand. It is a Hindu pilgrimage town on the banks of Bhagirathi, the origin of the river Ganga. The town is located in the greater Himalayan range and according to the popular Hindu mythologies, the goddess Ganga descended here when Lord Shiva released the river from his hair locks. Gangotri is one of the four sides of char Dham in India. The river flowing through Gangotri is Bhagirathi which originated from Gomukh in the Gangotri glacier. The original Gangotri Temple was built by General Amar Singh Thapa from Nepal.

Yamunotri Dham is located in the north of Uttarkashi district in Uttarakhand. It is one of the four sides in Char Dham. Yamunotri is the source of the river Yamuna in the western part of the Garhwal Himalayas. The main attraction of Yamunotri is the temple devoted to the goddess Yamuna. The temple of Yamuna was constructed by Maharaja Pratap Shah of Tehri Garhwal, however, there is the confusion that the original temple was built by Maharani Guleria of Jaipur in the 19th century. The diety Yamuna is made of black marble. On the occasion of Akshaya Tritiya, the temple and the place are open for the devotees.