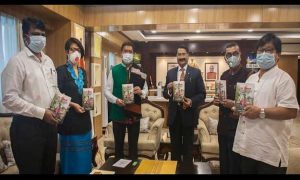 Tangams are one of the lesser-known ethnolinguistic groups within the Adi tribe of Arunachal Pradesh. According to the CFEL field survey 2016, the total population of the Tangam community is only 253 and resides only in one village. The outcome of the study is presented in the chapters which contain study on Tangam language intending to give crucial insights into the knowledge of language structures within the Tani group of languages.