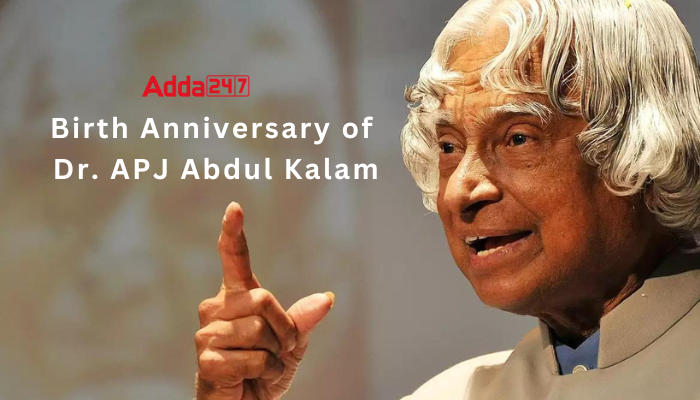 Avul Pakir Jainuladbeen Abdul Kalam born on 15th October 1931 was an Indian aerospace scientist and the 11th president of India. He served as the President of India from 2002 to 2007. He was known as the Missile Man of India for his works and development of ballistic missiles and launch vehicle technology.

He has spent more than four decades serving as a scientist and science administrator at Defence Research and Development Organization (DRDO) and Indian Space Research Organization (ISRO). He was constantly involved in the civil space program of India and military missile development. He was also the recipient of several prestigious awards which includes Bharat Ratna.

APJ Abdul Kalam also known as People’s President was born on 15th October 1931 in a Tamil Muslim family in Rameswaram on Pamban Island, then in the Presidency of Madras and now in Tamil Nadu. His father Jainuladbeen Marakayar was a boat owner and imam of a local mosque and his mother was a housewife. Abdul Kalam was the youngest of four brothers and one sister in his family. Abdul Kalam has been an average student in his school years but was considered hardworking and consistent. He completed his schooling at Schwartz Higher Secondary School, he went to Saint Joseph’s College in Tiruchirapalli. He graduated in physics in 1954. In 1955, he moved to Madras to study further Aerospace Engineering at the Madras Institute of Technology.

APJ Abdul Kalam has written several books and it has been praised all over the world. He had the vision of seeing India at the top of the world and he has described his vision in all his written works. Here are some of the most remarkable books by APJ Abdul Kalam.

“If you fail, never give up because FAIL means ‘First Attempt in Learning.”

“Failure will never overtake me if my determination to succeed is strong enough.”

“Dream is not that which you see while sleeping, it is something that does not let you sleep.”

“All birds find shelter during a rain, but an eagle avoids rains by flying above the clouds.”