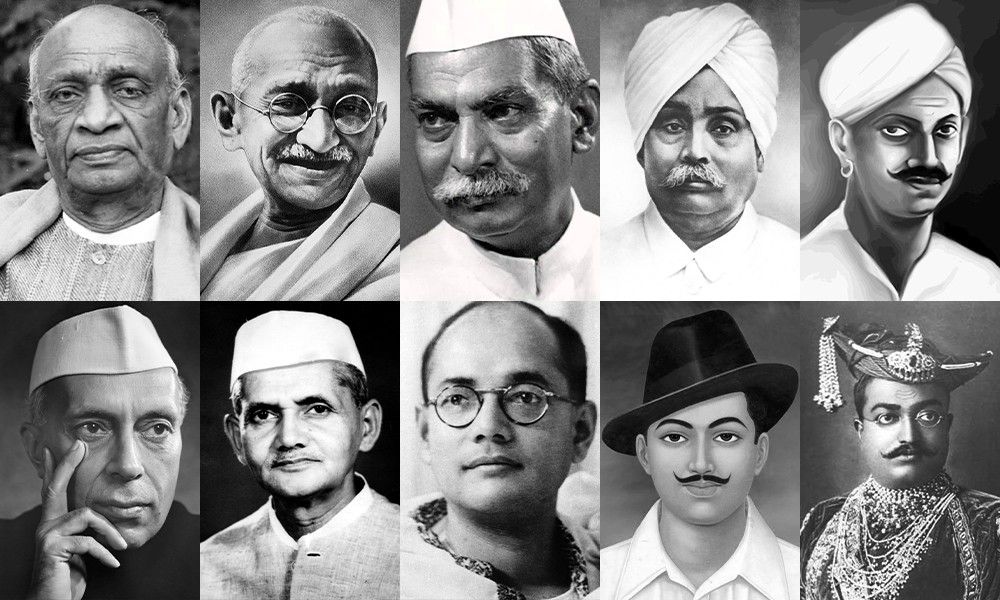 The Indian independence movement was made up of the efforts of people and groups from all walks of life to achieve political independence from the dominion of the British, French, and Portuguese. This is a list of famous people who opposed colonial rule on the Indian subcontinent or are thought to have opposed it. It was first started in 1857 as the famous First war of Independence or the Revolt of 1857.

Following independence, the Indian government recognized the name “freedom fighter” for individuals who participated in the movement. Let us have a look at some of the most important freedom fighters of Indian Independence movement:

The victorious struggle for India’s independence from British control was led by Indian lawyer, anti-colonial nationalist, and political ethicist Mohandas Karamchand Gandhi (Mahatma Gandhi), the father of the nation, who later served as an inspiration for movements for civil rights and freedom around the globe.

Bhimrao Ramji Ambedkar was an Indian jurist, economist, social reformer, and political figure who served as the chairman of the committee that drafted the Constitution of India from the discussions in the Constituent Assembly. He also held the position of Law and Justice Minister in Jawaharlal Nehru’s first cabinet and, after renunciating Hinduism, served as an inspiration for the Dalit Buddhist movement.

Rajendra Prasad was an Indian politician, attorney, advocate for Indian independence, journalist, and academic who presided over the Republic of India from 1950 to 1962. During the Indian Independence Movement, he joined the Indian National Congress and rose to prominence as a leader from the states of Bihar and Maharashtra. Prasad, a devotee of Mahatma Gandhi, was detained by British authorities during the Quit India campaign in 1942 and the Salt Satyagraha in 1931.

The first Deputy Prime Minister of India and the country’s first Home Minister, Vallabhbhai Jhaverbhai Patel, also known as Sardar, was an Indian lawyer, prominent political figure, lawyer, and statesman who served from 1947 to 1950. He is sometimes referred to as “Unifying India.” At a cost of USD 420 million, the Indian government built the Statue of Unity, the tallest statue in the world, which was dedicated to him on October 31, 2018. Its height is roughly 182 metres (597 feet).

A major personality in India throughout the middle of the 20th century, Jawaharlal Nehru was an anti-colonial patriot, secular humanist, social democrat, and author. In the 1930s and 1940s, Nehru was a key figure in the Indian nationalist movement. He was the first prime minister of India after its independence in 1947, holding the position for 16 years. Nehru greatly influenced India’s development into a modern nation in the 1950s by promoting parliamentary democracy, secularism, science, and technology. He kept India out of the Cold War’s two blocs in foreign affairs. He is a well-known novelist whose writings, including The Discovery of India and Letters from a Father to His Daughter, were written while he was incarcerated.

Bhagat Singh, a famous revolutionary from India, took part in the mistaken murder of a young British policeman as vengeance for the killing of an Indian nationalist. Later, he participated in a largely symbolic bombing of the Delhi Central Legislative Assembly and went on a hunger strike while imprisoned. As a result of sympathetic press coverage in Indian-owned newspapers, he became well-known in the Punjab region, and after his execution at age 23, he was revered as a martyr and folk hero in Northern India.

Gandhian and Indian liberation fighter Pingali Venkayya. He is credited for creating the Swaraj Flag, which Mahatma Gandhi used during the Indian independence movement and which Surayya Tyabji eventually changed into the Indian Flag. He was also a polyglot, lecturer, novelist, geologist, educationalist, and farmer.

After the passing of the party’s founder, Ram Prasad Bismil, and three other important party leaders, Roshan Singh, Rajendra Nath Lahiri, and Ashfaqulla Khan, Chandra Shekhar Tiwari, also known as Chandra Shekhar Azad, reorganised the Hindustan Republican Association (HRA) under its new name, Hindustan Socialist Republican Association (HSRA). His parents were Sitaram Tiwari and Jagrani Devi, and he was from Badarka, Unnao in Uttar Pradesh. As the commander in chief of the HSRA, he frequently signed pamphlets under the alias “Balraj.”

However, his wartime alliances with Nazi Germany and Imperial Japan left a legacy plagued by authoritarianism, anti-Semitism, and military failure. Subhas Chandra Bose was an Indian nationalist whose rejection of British rule in India made him a hero among Indians. Early in 1942, German and Indian officials in the Special Bureau for India in Berlin and Indian soldiers of the Indische Legion addressed Bose as Netaji for the first time. It is presently utilised all throughout India.

During the Indian independence movement and the period of British colonial administration in India, Chittaranjan Das, also known as Deshbandhu, was a freedom fighter, political activist, and lawyer. He also founded and served as the leader of the Swaraj Party in undivided Bengal. He goes by the initials C. R. Das. In addition to several articles and essays, he was closely affiliated with a number of literary clubs and composed poetry.

Vinayak Damodar Savarkar was an Indian politician, activist, and author. Savarkar gave his honorific prefix Veer to his supporters. While detained at Ratnagiri in 1922, he created the Hindu nationalist political ideology known as Hindutva. He held a position of prominence in the Hindu Mahasabha.

The Indian Home Rule Society, India House, and The Indian Sociologist were all created in London by Shyamji Krishna Varma, an Indian revolutionary, nationalist, lawyer, and journalist. Krishna Varma was a renowned expert in Sanskrit and other Indian languages and a Balliol College graduate. He worked as the Divan of several Indian princely princes in India and followed a brief legal career there. He had disagreements with the Crown, was fired at Junagadh after a purported conspiracy involving British colonial authorities, and then made the decision to go back to England.

Indian revolutionary Rash Behari Bose led the fight against the British Raj. He was a key organiser of the Ghadar Mutiny and established the First Indian National Army during World War 2 on the basis of Vinayak Damodar Savarkar’s militarization programme. During the Japanese invasion of Singapore, men from the British Indian Army switched allegiance to the INA. Vinayak Damodar Savarkar, the president of the Hindu Mahasabha in India, served as his inspiration when he created the Hindu Mahasabha in Japan in 1938.

The Rebellion of 1857 or the Revolt of 1857 is known as the first war of Independence. Here are some of the most important leaders of the 1857 revolt:

An important role was played by an Indian soldier named Mangal Pandey in the events that took place just before the 1857 Indian uprising began. He served as a sepoy (infantryman) in the British East India Company’s 34th Bengal Native Infantry (BNI) regiment. The Indian government released a postage stamp in his honour in 1984. A number of film projects have also depicted his life and deeds.

During the Indian Rebellion of 1857 against the East India Company, General Bakht Khan served as the military leader of the Indian independent forces in the Delhi region.

Freedom warrior Chetram Jatav took part in the Indian Rebellion of 1857. On May 26, 1857, in the North-Western Provinces’ Soro area of Eta, he joined the mutiny (now Uttar Pradesh). They were shot while being tied to a tree.

Bahadur Shah II, the twentieth and final Mughal Emperor of India, was born Mirza Abu Zafar Siraj-ud-din Muhammad. After being found guilty of multiple charges stemming from his participation in the Indian Mutiny of 1857, the British deported him to Rangoon in British-controlled Burma in 1858.

The second wife of Nawab of Awadh Wajid Ali Shah and the regent of Awadh in 1857–1858 was Begum Hazrat Mahal, also referred to as the Begum of Awadh. She is renowned for playing a pivotal part in the Indian Rebellion of 1857’s uprising against the British East India Company.

As the wife of Maharaja Gangadhar Rao, Lakshmibai served as the Maharani consort of the Maratha princely state of Jhansi from 1843 until 1853. She was a key player in the 1857 Indian Rebellion and became a stand-in for Indian nationalists’ opposition to the British Raj.