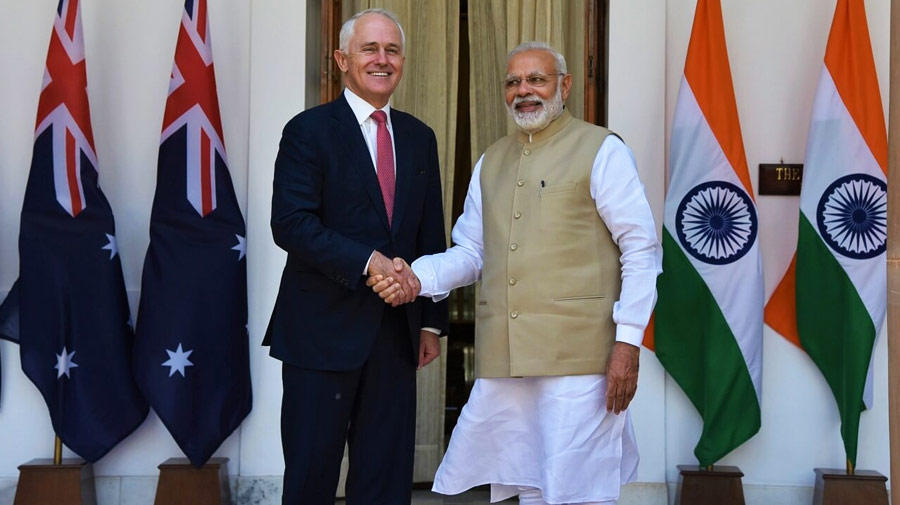 India is one of Australia’s most important Indo-Pacific partners, with the relationship characterised by strong people-to-people links and close cooperation at all levels of government. The Australia-India relationship is at a high point, underpinned by the Comprehensive Strategic Partnership announced by Prime Ministers Morrison and Modi in June 2020, significant investments to bolster our economic ties announced as part of the India Economic Strategy Update, launched in March 2022, and the signing of the Australia-India Economic Cooperation and Trade Agreement in April 2022.

History Of The Partnership:

Australia and India established diplomatic relations in the pre-Independence period, when the Consulate General of India was first opened as a Trade Office in Sydney in 1941. India’s first High Commissioner to Australia arrived in Canberra in 1945. In March 1944, Lieutenant-General Iven Mackay was appointed Australia’s first High Commissioner to India. Australia has placed India at the forefront of its international partnerships. Two-way Prime Ministerial visits in 2014 have been followed by regular leaders’ meetings. Former Prime Minister Turnbull visited New Delhi and Mumbai in April 2017.

Recent years have seen remarkable growth in the trading relationship between India and Australia, fuelled by the many complementarities between the two economies. Two-way trade in goods and services has grown in value from $13.6 billion in 2007 to $24.3 billion in 2020. ECTA is the first trade agreement of India with a developed country after more than a decade and provides for an institutional mechanism to improve trade between the two countries. Australia is the 17th largest trading partner of India and India is Australia’s 9th largest trading partner. The ECTA is expected to almost double the bilateral trade from USD 27.5 bn (2021) to about USD 45 to USD 50 Billion in the next five years. ECTA is expected to create new employment opportunities, raise living standards and enhance the overall welfare of the people of both countries. Additional employment generation is expected to be 10 lakhs within the next five years.

The Important Pillars Of Relationship:

The Australia-India Council (AIC) was established on 21 May 1992 in response to a recommendation by the Senate Standing Committee on Foreign Affairs, Defence and Trade, following an inquiry into Australia’s relations with India. AIC broadens the relationship between Australia & India raising awareness & promoting exchanges.

The Australia-India education partnership is important in driving engagement, collaboration and building the bridge between our communities. Unique among India’s education partners Australia has a ministerial lead policy forum, the Australia India Education Council (AIEC), which provides a platform for ministerial engagement on policy and operational issues across education. The AIEC is co-chaired by education ministers from both countries and includes representatives from government, academia and industry.

Australia and India have a positive defence relationship, underpinned by the 2006 Memorandum on Defence Cooperation and the 2009 Joint Declaration on Security Co-operation.  Following the agreement in 2014 of a bilateral Framework for Security Cooperation the defence relationship has grown to include a range of forums for strategic dialogue, as well as regular interactions between our respective services through senior visits, staff talks, and training exchanges.

The QUAD: Core Of The Partnership:

Australia’s Quad partnership with India, Japan and the United States is a key pillar in Australia’s foreign policy. The Quad is a diplomatic network of four countries committed to supporting a free and open Indo-Pacific that is inclusive and resilient. It complements our other bilateral, regional and multilateral cooperation, including with ASEAN member states and Pacific partners.

The Quad has a positive, practical agenda to respond to the region’s most pressing challenges, including COVID-19 vaccines, climate change, infrastructure, critical and emerging technology, cyber security, humanitarian assistance and disaster relief, space, maritime security, countering disinformation, and counter-terrorism. Quad partners are steadfast supporters of ASEAN centrality, the ASEAN-led architecture and ASEAN’s Outlook on Indo-Pacific. The Quad’s origins date back to our collaboration in response to the December 2004 Indian Ocean tsunami. This Quad meeting not only saw Australia and India approach the dialogue with a similar strategy of building towards rather than containment of, but it also saw their shared perspectives, values and interests lead to favourable outcomes in the bilateral relationship.

A shared wariness over China:

Indeed, Australia and India have had much success in defence and security cooperation and diplomatic coordination in recent years. They have obvious overlapping interests here, principally the management of China’s assertiveness across the Indo-Pacific region. New Delhi’s concerns about China long predate Australia’s. The scale of the threat Beijing could pose to India is much greater, too.

In 1947, the British bequeathed independent India an unsettled northern border—a situation exacerbated by Chinese leader Mao Zedong’s invasion of the erstwhile buffer state of Tibet a couple of years later. Since then, China and India have watched each other warily and periodically come to blows. They had a border war in 1962, a large-scale confrontation in 1986-87 and a brief but nasty engagement in 2020. Since the 1962 border war, New Delhi has handled the potential threat with a mix of strategic partnerships with other countries and military power.

In 1971, India signed a treaty with the Soviet Union that gave it access to advanced defecse technology and Moscow’s diplomatic backing. Then, in 1998, as India watched Chinese leader Deng Xiaoping’s reforms work their magic on China’s economy, New Delhi acquired a nuclear deterrent as an added safeguard. And since the mid-2000s, India’s leaders have looked to new potential partners to invest in its economy, boost its military capabilities even further and bolster its regional influence. These include its partners in the Quad security grouping – the US, Japan, and Australia.

Australia’s recent history with China obviously looks quite different. For most of the 1990s and 2000s, Canberra simply saw an opportunity. China’s economy was booming and its hunger for resources saw it become Australia’s biggest trading partner.

Australia began to show a new interest in India. In 2009, then-Prime Minister Kevin Rudd went to New Delhi and signed a new security agreement. Talks about a trade deal followed and Australia’s long-standing ban on uranium sales to India was dropped. Canberra adopted a new India-inclusive term to describe the region—the Indo-Pacific—and began in earnest to construct new defence and security ties with New Delhi. A decade on, with no sign of the pressure from Beijing abating for either Australia or India, these ties are blossoming. Both countries are also committed to expanding the economic side of their relationship. India is Australia’s seventh-largest trading partner, but there is potential to boost bilateral flows of goods, services, and investment.