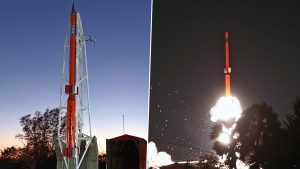 Indian Space Research Organisation (ISRO) has launched the sounding rocket (RH-560) to study attitudinal variations in the neutral winds and plasma dynamics, at Satish Dhawan Space Centre (SDSC), Sriharikota Range (SHAR). ISRO has developed a series of sounding rockets called Rohini series, important among them being RH-200, RH-300 and RH-560, number in the name indicating the diameter of the rocket in mm, according to the Bengaluru-headquartered space agency.

Sounding rockets are one or two-stage solid propellant rockets used for probing the upper atmospheric regions and for space research. They also serve as easily affordable platforms to test or prove prototypes of new components or subsystems intended for use in launch vehicles and satellites.