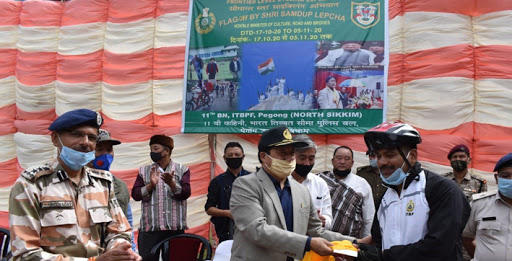 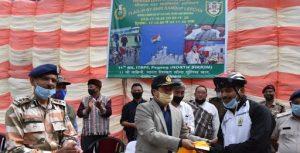 The Eleventh Battalion Indo-Tibetan Border Police (ITBP) has launched a cycling expedition from its Pegong base in Sikkim to border villages of the state. The Minister of Culture, Road and Bridges Department of Sikkim, Samdup Lepcha flagged off the expedition. Total 218 Kilometers will be covered by the ITBP team in the course of 20 days in difficult terrains.

The team will generate more awareness among masses of the border villages on Covid 19 related issues, will organize medical and veterinary camps, distribute hygiene and sanitation items. They will also spread awareness about various government missions for the welfare of society at large. The 18 member team of ITBP will cover difficult terrain in the expedition. Most of the members are highly trained mountaineers and rescuers. The expedition will reach Gurudongmar lake at extremely high altitude as its destination before starting the return journey.

Raised in 1962, the ITBP is primarily a mountain force known for being deployed in harsh Himalayan borders of China since its inception. With more than 215 successful mountaineering expeditions undertaken till now, the force will complete 58 years of its raising on 24 October.