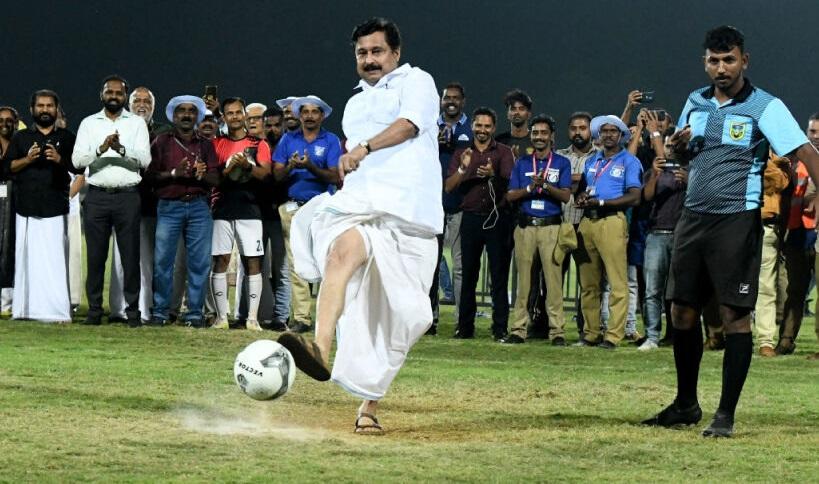 Kerala has kicked itself into the Guinness Book of World Records by taking 4,500 penalty kicks in 12 hours. The Department of Sports and Youth Affairs made it possible for the football-crazy State to set the Guinness record at a Dream Goal penalty shootout organised at Payyanad Football Stadium at Manjeri.
The excitement was palpable at the stadium throughout the day as hundreds of footballers, students, teachers and football lovers queued up to take the penalty kicks. Many missed, but some netted with impeccable perfection. The zest of Malappuram was evident throughout.

There was no break since former Indian player U. Sharafali took the inaugural kick at 7.38 a.m. and netted the ball. Others followed without losing time. By midday, Malappuram broke Germany’s existing record of 2,500 kicks. But the momentum continued until Minister for Sports and Youth Affairs V. Abdurahiman took the last penalty kick at 7.38 p.m. The crowds were in full cheer as Mr. Abdurahiman netted the ball into a corner of the post like a veteran footballer.

The organisers arranged students from different schools and colleges across Malappuram district and they were set in batches of 50. Each batch was given 50 balls. Under the surveillance of the Guinness officials, the participants stood in queue after registering themselves by producing their Aadhaar cards.

One by one, they proceeded with the ball to the penalty area, placed the ball on the spot, and took the kick with enthusiasm. Goalkeepers and referees kept changing at regular intervals.
About 3,500 students from various campuses, including sports academies, took part in the Guinness venture. Cheering the students from the crowd was veteran politician and Mapilapattu expert T.K. Hamza.

Mappila songs (or Mappila Paattu) are a folklore Muslim song genre rendered to lyrics, within a melodic framework (Ishal), in Arabi Malayalam by the Mappilas of the Malabar region in Kerala, India. Mappila songs have a distinct cultural identity, while at the same time remain closely linked to the cultural practices of Kerala.