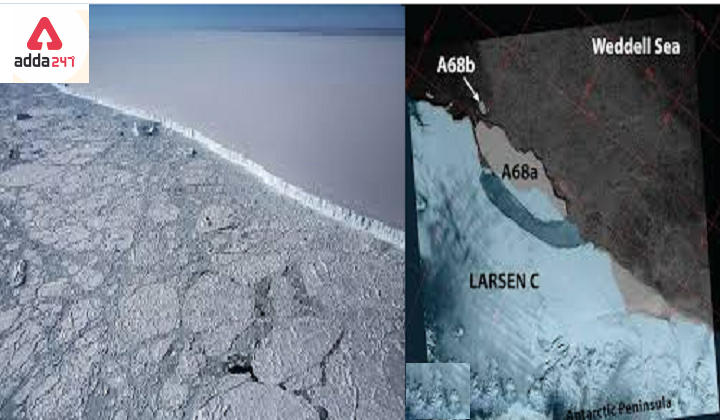 A68a, the giant Antarctic iceberg has become a cause for concern for South Georgia Island.

The giant iceberg A68, the biggest block of free-floating ice from Antarctica with an area of about 5,800 sq. Km.

Since 2017, it has been drifting in the Atlantic Ocean. Due to an ocean current, this year the iceberg was propelled into the South Atlantic Ocean and since then it has been drifting towards the remote sub-Antarctic island of South Georgia. It is a British Overseas Territory (BOT). This has prompted fears about the impact the iceberg could have on the island’s abundant wildlife.

They travel with ocean currents and either get caught up in shallow waters or ground themselves.

About Iceberg A68a and where is it headed?

An iceberg A68a is a roughly size of the state of Delaware, split off from Antarctica’s Larsen C ice shelf in July 2017. Since then it has been drifting towards the remote island of South Georgia, which is a British Overseas Territory (BOT).

The US National Ice Center (USNIC) recently, confirmed that two new icebergs calved from A68a and were large enough to be named and tracked. They are called A68E and A68F.

Why did the iceberg calve?

As per BAS, the iceberg’s calving is thought to be a natural event and not a result of climate change. However, some models predict that a warming Antarctica in the future could mean more calving events as ice shelves and glaciers retreat.

– In the South Atlantic Ocean, South Georgia is an island that is part of the British Overseas Territory of South Georgia and the South Sandwich Islands (SGSSI). The main settlement is Grytviken.

– USNIC is US National Ice Center which is responsible for naming icebergs, which are named according to the Atlantic quadrant in which they are spotted.