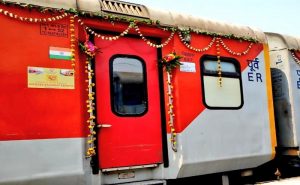 A passenger train Rajdhani Express from Assam’s Silchar railway station has reached the Vaingaichunpao railway station in Manipur for a trial run, putting the state on the Indian Railways map. The train covered the distance of 11 km between the two northeastern stations, with railway officials onboard.

The train halted briefly at Manipur’s Jiribam railway station, where railway officials were greeted by local citizens before the national flag was hoisted accompanied by the national anthem. Notably, the Vaingaichunpao-Imphal (capital of Manipur) railway line is also under construction. Once completed, it will be the longest railway tunnel near Imphal.