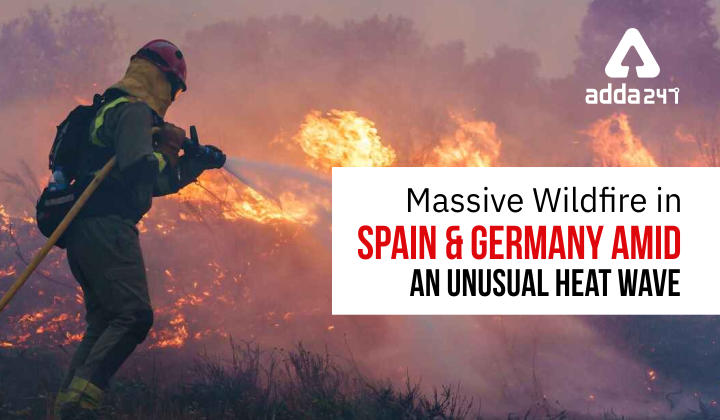 Wildfire in Germany and Spain: Details

Due to an unusual heat wave, western Europe and Germany struggled with wildfires. There has been severe damage in several places in Spain and Germany. The Northwest province of Zamora is affected by over 25000 hectares. In Germany residents of three villages near Berlin have been ordered to leave their homes due to the approaching wildfire as requested by the officials.

The Spanish authorities said that after 3 days of high-temperature high wind and low humidity some rest came with dropping temperatures. 650 firefighters along with water dumping aircraft were allowed to establish a perimeter around the fire which started in Zamora’s Sierra de la Culebra. The authorities have warned people that there was still a danger of unfavorable shifts in weather and the revival of the blaze. Spain has been on alert for an outbreak of intense wildfire as the country suffers from the record temperature in many places in the country. Experts have claimed that the hot period for Europe is due to climate change. The lack of rainfall this year has resulted in these conditions for the country.

All Details About Atmanirbhar Bharat And Details On It’s Tranches

Wildfire in Germany and Spain: Call of Authorities

Authorities have informed that gusting winds of 70 kph combined with a temperature of nearly 40 Celsius made it difficult for the crews to handle the fire. A fire broke out in Zamora, due to the electrical storm strike and the fire spread caused the high-speed train services from Madurai to Spain’s Northwest to be cut. Till now there have been no reports for loss of life in the wildfire but the flames have reached the villages of both Zamora and Navarra. In Navarra, authorities have evacuated 15 villages as a precaution due to the high temperature in the area which is expected not to drop soon. Navarra regional vice-president Javier Remírez told TVE “The situation remains delicate. We have various active fires due to the extremely high temperatures and high winds.” Due to intense heat rising in several places in Germany, there have been numerous Wildfires. The lack of rain has made it more difficult for the officials to control the rising heat.

FAQs related to Wildfire in Spain and Germany

2. What caused the fire in Zamora in Spain?
Ans. The fire in Spain was a result of an electrical storm. The high-speed train service from Madurai to Spain Northwest was cut due to the approaching fire.