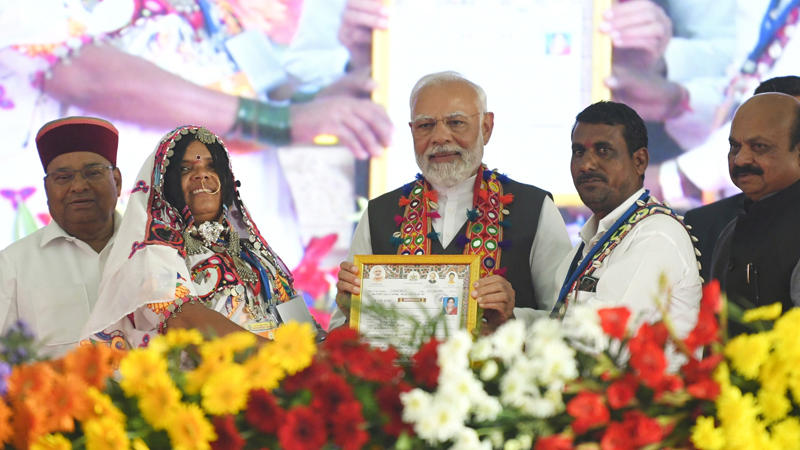 Prime Minister Narendra Modi distributed title deeds or ‘Hakku Patra’ to over 52,000 eligible beneficiaries from the Lambani nomadic tribes residing in northern Karnataka. The five families were among the 50,000-plus families to whom land title deeds were distributed during the programme. The event was organised by the state Revenue Department at Malkhed, in the Kalaburagi district of Karnataka.

A Hakku Patra in Kannada means “Claim Letter”. The words “Hakku” mean “the right”. A legal document known as a “Hakku Patra” details a person’s legitimate inheritance or ownership of a particular property.

With the help of this document, the bearer is eligible to purchase and sell land to which the title deed is granted by the government. They will further receive bank benefits by means of the Hakku Patra. This Hakku Patra will secure the future of thousands of people living in the “Thandas” (Lambani habitats) in Kalaburagi, Bidar, Yadgiri, Raichur and Vijayapura districts.

Who are the Banjaras:

The Banjara, also known as Lambadi, Gour Rajput, Labana, are a historically nomadic trading caste who may have origins in the Mewar region of what is now Rajasthan. According to the National Informatics Centre, the name Banjara /Banjari probably had came from two different sources: ‘Banijya’ – trade or ‘Banachara’, the forest dwellers. Their principal group’s name Laban/Labana is derived from the Sanskrit word lavanah, meaning salt as they were salt traders. They are found moving around in different parts of the country especially during fairs and festivals. Despite the community adopting a multitude of languages, Banjara is used throughout India, although in Karnataka the name is altered to Banijagaru.