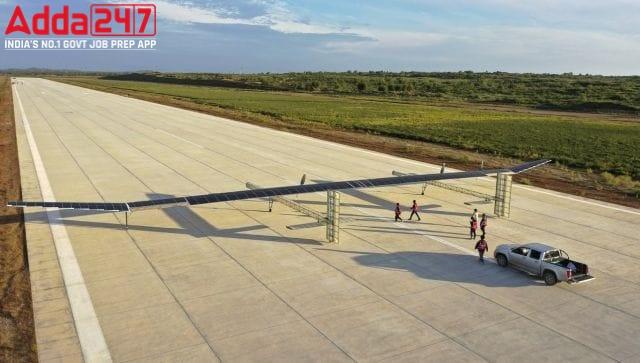 China has successfully tested its first fully solar-powered unmanned aerial vehicle (UAV) which can fly for months and can function even as a satellite if required. The maiden flight of Qimingxing-50 has been achieved, making it the first large-sized UAV powered only by solar energy, a Chinese government official informed in a tweet.

When The Trial Was Conducted:

According to a report in the South China Morning Post, the drone took off from an airport in the north-western Chinese province of Shaanxi at 5.50pm on September 3 and propelled in the sky for about 26 minutes before landing safely at 6:16pm.

What is the significance of this test flight:

The Qimingxing-50, with a wingspan of 50 m, is a high-altitude long-endurance drone that is capable of high altitude aerial reconnaissance, assessing forest fire and can also be used for communications. This technology will bolster Chinese defences in space and at sea. It can be used in the field of renewable energy, new materials and aeronautical engineering. The Chinese official also asserted that this test flight is an important step towards sustainable development.

The UAV, whose name translates as Morning star-50 in English, is claimed to be capable of functioning uninterrupted for months. This capability of having long endurance flight gives it a use case of operating as a satellite. Like satellites, it is fully electric-driven powered by solar energy and can operate at 20 km above the Earth’s surface for an extended period continuously. It is also referred to as a ‘High Altitude Platform Stations’ or a pseudo satellite. It can be used when there is unavailability or disruption in satellite services. Compared to the cost and complexity of installing a satellite in orbit, this UAV is much more cost-effective and easy to operate, the report says.

Other countries with similar technology:

The United States and the United Kingdom have already developed solar-powered drones that can fly 20 km up in the sky. In July this year, the US army helped test a solar-powered, near-space Airbus Zephyr S drone that remained in the sky for 64 continuous days before it crash-landed in Arizona. Earlier in 2019, a Hawk30 – high-altitude pseudo-satellite – developed for high-altitude communications successfully completed its test flights. It is a grown version of the NASA Pathfinder and NASA Helios.