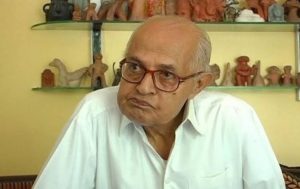 Renowned Assamese poet and recipient of Jnapith Award, Nilamani Phookan has passed away. He was 89. Phookan was one of the most celebrated poet of Assam and has been awarded the country’s highest literary award, the 56th Jnanpith for the year 2021. The notable works of Phukan are ‘Xurjya Henu Naami Aahe Ei Nodiyedi’, ‘Kabita’, and ‘Gulapi Jamur Lagna’.

Phookan was born on September 10, 1933, Phookan’s poems were replete with French symbolism which he infused in his Assamese poetry. He was awarded the 1981 Sahitya Akademi Award in Assamese for his poetry collection, Kavita (Kobita). He was awarded the Padma Shri by the Government of India in 1990 and received the Sahitya Akademi Fellowship, the highest literary honor in India, given by Sahitya Akademi, India’s National Academy of Letters in 2002. He was selected as an ‘Emeritus Fellow’ for a period of two years by the Cultural Department, Govt. of India in 1998. Assam Sahitya Sabha also conferred ‘Sahityacharya’ honour to him.