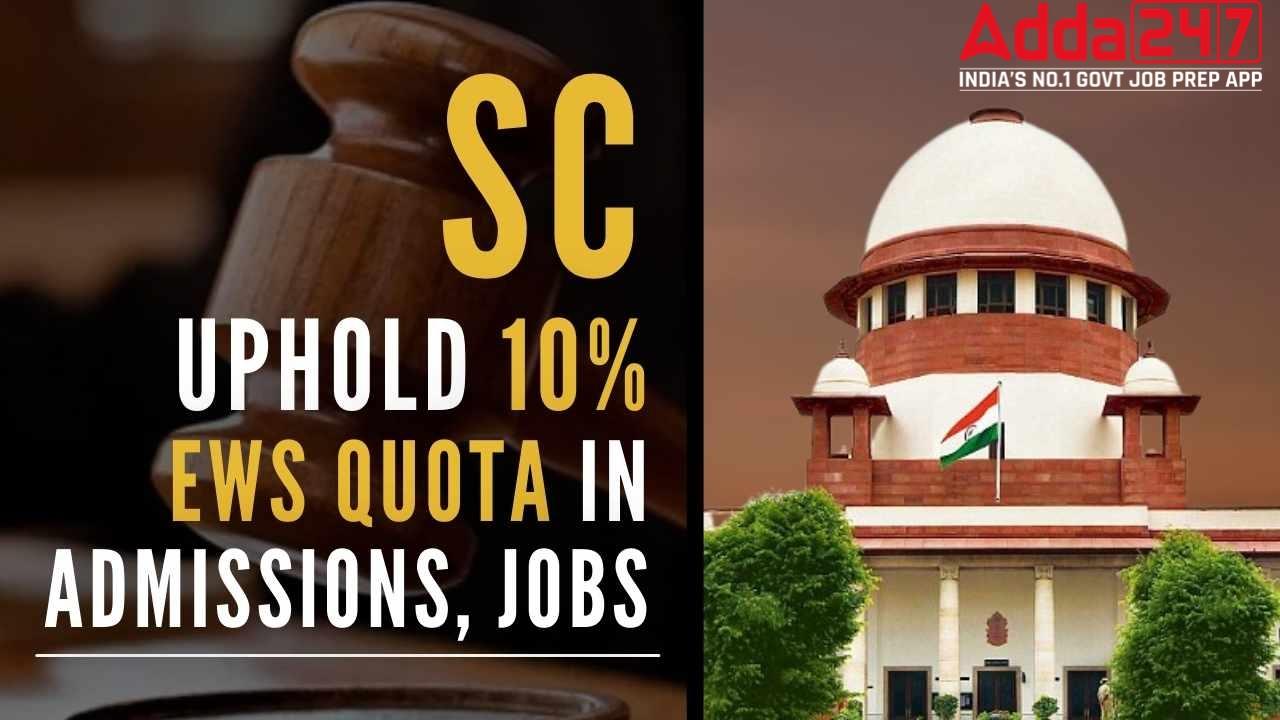 The Supreme Court (SC)  upheld the 10 per cent reservation for the economically weaker section (EWS) among forward castes in government jobs and colleges across India. A Bench comprising Chief Justice of India (CJI) U U Lalit and Justices Dinesh Maheshwari, S Ravindra Bhat, Bela M Trivedi, and J B Pardiwala delivered the judgment.

Reading out the verdict, Justice Maheshwari said that the 103rd constitutional amendment for the EWS quota was valid and did not violate the basic structure of the Constitution. Reservation, he said, is an instrument of affirmative action to ensure an all-inclusive march towards the goals of an egalitarian society.

Justice Dinesh Maheshwari said the 103rd constitutional amendment cannot be said to breach the basic structure of the Constitution.

“Basic structure can’t be breached by enabling state to make provisions for education,” he added. He noted that reservation is instrumental not just for inclusion of socially and economically backward classes into the society but also to class so disadvantaged.

In his minority view, Justice Ravindra Bhat said that what is described as benefits by the Union cannot be understood to be a free pass, but as reparative mechanism to have a level playing field. Their exclusion discriminates equality code and violates basic structure, he said.

“Reservation is contrary to the essence of equal opportunity. The 103rd amendment practices prohibited forms of discrimination,” he said. He also noted that the bulk of economically weaker sections belong to SCs and OBCs.

About The Reservation: Present View:

While upholding the validity of EWS quota, Justice Pardiwala said reservation is not an end but a means to secure social justice. He stated that it is necessary to review the method of identification of backward classes for reservation. “The idea of Dr Ambedkar was to bring reservation for 10 years but it has continued. Reservation shouldn’t be allowed to become vested interest,” he said.

Reservation has been provided to historically disadvantaged cannot be basis to contain other disadvantaged groups unable to progress and say that provision can’t be made for EWS through amendment. Reservation through economic criteria per se not violative, he held.

In simple terms, reservation in India is all about reserving access to seats in the government jobs, educational institutions, and even legislatures to certain sections of the population.

Also known as affirmative action, the reservation can also be seen as positive discrimination. Reservation in India is a government policy, backed by the Indian Constitution (by means of various amendments).

To an extent, reservation as a policy is pursued by the State to correct the historical injustice done to certain castes by the so-called “upper castes”. The caste system prevailed in India had alienated many “lower castes” from the mainstream – hindering their development. To a great extent, the repercussions are still felt. Original Consitution of India has provided reservation only for quota in legislatures – that too only for 10 years until 1960 (article 334). Subsequent amendments to the constitution extended the period of reservation for quota in legislatures.

The Basic Structure: Reference Made In Verdict:

Justice Bhat observed that reservations were conceived and quotas created to offset deep-rooted wrongs on communities and castes. “Reservations designed as powerful tool to enable equal access. Introduction of economic criteria and excluding other backward classes ,SC, ST, OBC, saying they had these pre-existing benefits is injustice,” he stated. He argued that the exclusionary clause operates in utterly arbitrary manner, as well as against socially disaffected castes by confining them within their quotas.

It denies chance of mobility from reserved quota based on past discrimination to reservations under economic criteria. Impugned amendment and classification it creates is arbitrary, results in discrimination,” he said.

For these reasons, Justice Bhat struck down article 15(6) and 16(6) and held them to be violative of equality code, particularly for violating principles of non-discrimination and non-inclusion which form part of basic structure.

What Is Basic Structure Doctrine:

Another Important Revolving Issue, To Know More, Follow The Below link:

What Is Uniform Civil Code(UCC): A Big Picture