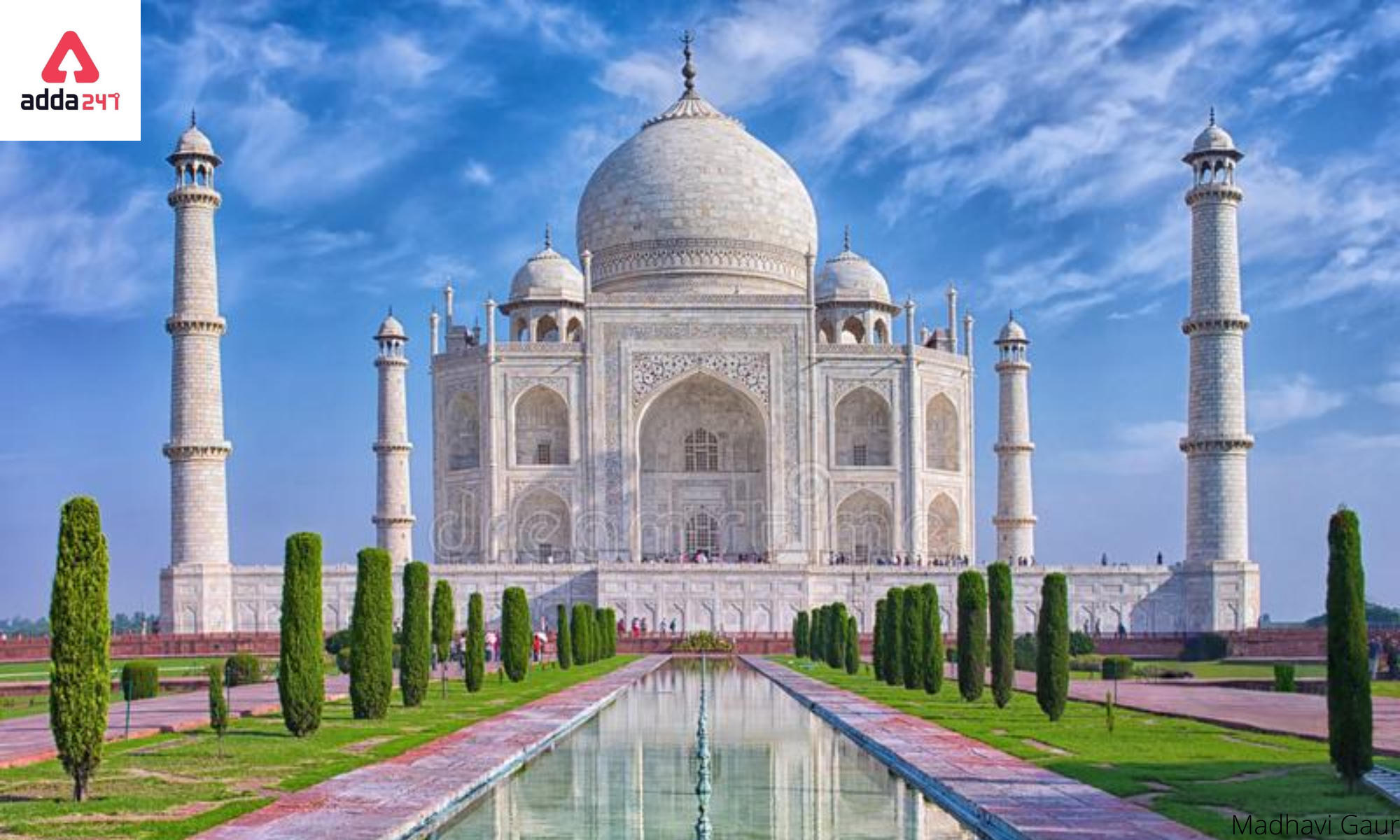 Taj Mahal is a mausoleum complex located in Agra, Uttar Pradesh, India. The Taj Mahal was erected by Mughal emperor Shah Jahn (reigned 1628–58) to honour his wife Mumtaz Mahal (“Chosen One of the Palace”), who died in childbirth in 1631 after being the emperor’s closest companion since their marriage in 1612. It is located in the eastern section of the city, on the southern (right) bank of the Yamuna (Jumna) River, and is India’s most famous and widely recognised structure. The Taj Mahal is roughly 1 mile (1.6 km) west of Agra Fort (Red Fort), which is situated on the right bank of the Yamuna. The Taj Mahal is the finest example of Mughal architecture, a fusion of Indian, Persian, and Islamic forms, due to its harmonious proportions and fluid incorporation of decorative elements. Other features include beautiful gardens, a museum, and twin mosque complexes (positioned symmetrically on either side of the mausoleum). The Taj Mahal is one of the world’s most magnificent structural compositions, as well as one of the world’s most iconic landmarks, drawing millions of tourists each year. In 1983, the complex was named a UNESCO World Heritage Site.

In 1631, Shah Jahan ordered the Taj Mahal to be built in honour of his wife Mumtaz Mahal, who died on June 17 of that year while giving birth to their 14th child, Gauhara Begum. Construction on the mausoleum began in 1632 and was completed in 1648, with the surrounding structures and garden following five years later. The imperial court’s record of Shah Jahan’s mourning following Mumtaz Mahal’s death reveals the love story that inspired the Taj Mahal.

The Taj Mahal integrates and develops on Indo-Islamic and older Mughal design traditions. The Gur-e Amir (the tomb of Timur, the founder of the Mughal dynasty, in Samarkand), Humayun’s Tomb (which inspired the Charbagh gardens and hasht-behesht (architecture) plan of the site), Itmad-Ud-Tomb Daulah’s (also known as the Baby Taj), and Shah Jahan’s own Jama Masjid in Delhi were all sources of inspiration. Earlier Mughal structures were mostly made of red sandstone, but Shah Jahan encouraged the use of white marble inlaid with semi-precious stones. Buildings under his patronage were refined to unprecedented heights.

The Taj Mahal’s tomb is the focal point of the entire structure. It is a symmetrical edifice with an iwan (an arch-shaped gateway) topped by a massive dome and finial situated on a square base. The core elements, like most Mughal tombs, are Indo-Islamic in nature. The Taj Mahal’s exterior decorations are among the best in Mughal architecture. The decorations are correspondingly refined as the surface area changes. Paint, stucco, stone inlays, and carvings were used to create the ornamental components. The decorative elements might be classified as calligraphy, abstract forms, or vegetal motifs, in accordance with the Islamic restriction on the use of anthropomorphic figures. Some of the decorative components of the complex are Qur’anic texts. According to recent research, Amanat Khan chose the texts. The Taj Mahal’s interior chamber goes far beyond customary decorative embellishments. The inlay work is a lapidary of precious and semiprecious gemstones rather than pietra dura. The inner chamber is shaped like an octagon, having doors on each side, albeit only the one facing the garden to the south is used. 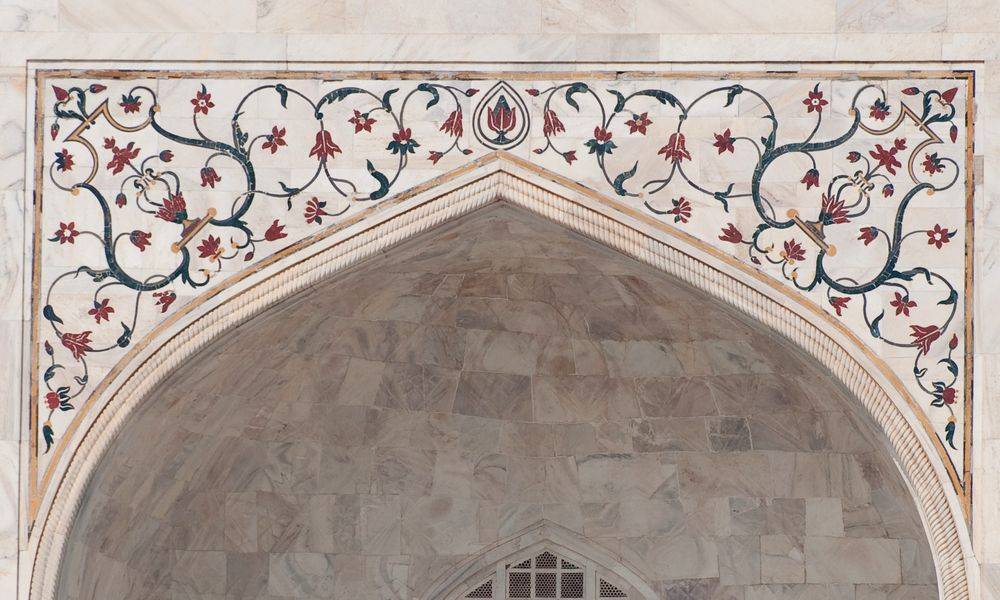 The compound is built around a vast Mughal garden, that is 300 metres square. Each of the four quarters of the garden is divided into 16 sunken parterres or flowerbeds by raised paths. A high marble water tank with a reflecting pool in the centre of the garden, halfway between the tomb and the entryway, reflects the image of the mausoleum on a north–south axis. The high marble water tank is known as al Hawd al-Kawthar, which refers to Muhammad’s promised Tank of Abundance. In the Indian Subcontinent, the inlay technique of employing cut and fitted, highly polished colourful stones to form images is known as Parchin kari or Parchinkari. It is regarded as a decorative art form. The stonework is glued stone-by-stone to a substrate after being “sliced and carved in varied shape portions; and then fitted together so precisely that the contact between each section was nearly unnoticeable” after being loosely joined. The stones were grooved on the undersides so that they interlocked like a jigsaw puzzle, and everything was held tautly in place by an encircling ‘frame.’ Many different coloured stones were used, including marbles, semiprecious stones, and even precious stones. 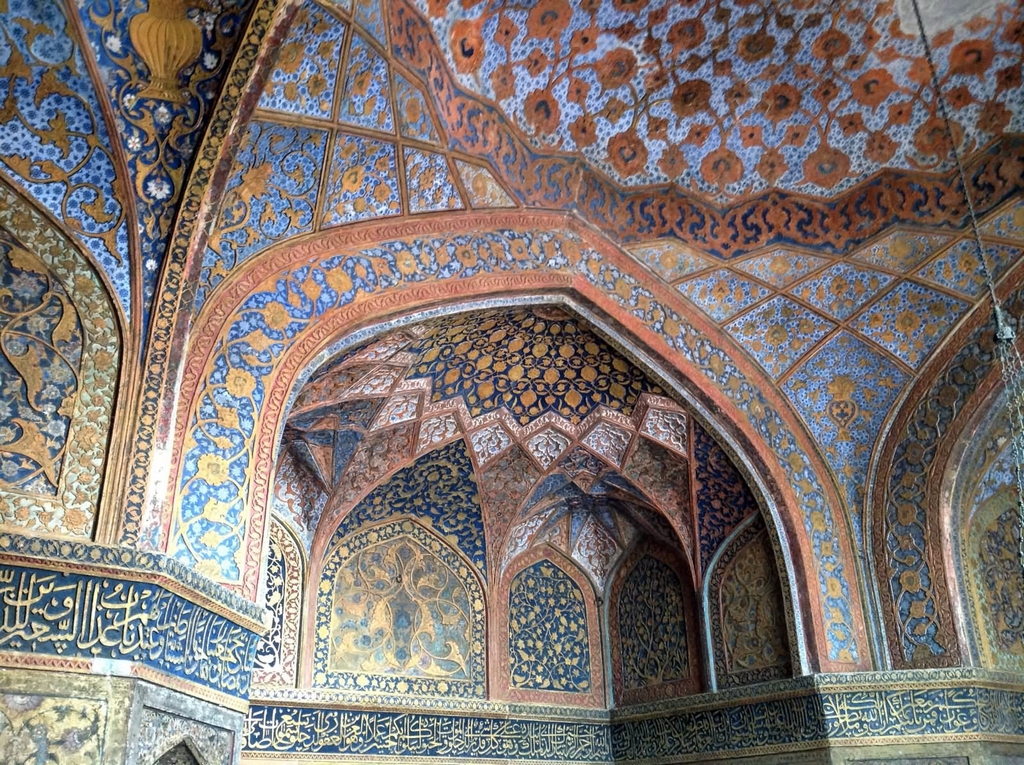 The complex’s blueprints have been assigned to a number of different architects throughout history, though the principal architect was most likely Ustad Amad Lahawr, an Indian of Persian heritage. The complex’s five main elements—the main gateway, garden, mosque, jawb, and mausoleum—were conceptualised and designed as a cohesive entity, with no further additions or alterations, according to Mughal building practise. Construction began in 1632. More than 20,000 workmen from India, Persia, the Ottoman Empire, and Europe were employed to create the mausoleum by 1638–39; the auxiliary buildings were completed by 1643, and decorating work lasted until at least 1647. The 42-acre facility took 22 years to develop in total. According to legend, Shah Jahn intended to construct another tomb across the river to house his own bones. That structure was supposed to be made of black marble, and it was supposed to be connected to the Taj Mahal by a bridge. He was ousted by his son Aurangzeb in 1658 and imprisoned in Agra Fort for the rest of his life.

What is Taj Mahal famous for?

The Taj Mahal is a massive white marble monument erected in Agra between 1631 and 1648 on the orders of Mughal emperor Shah Jahan in honour of his favourite bride. The Taj Mahal is India’s crown jewel of Muslim art and one of the world’s most widely admired works of art.

What is history of Taj Mahal?

The Taj Mahal, which was built in remembrance of Emperor Shah Jahan’s wife Mumtaz Mahal in 1632, was originally known as ‘Roza-e-Munavvara,’ which means Unique Building, but was later renamed Taj Mahal by Shah Jahan as a loving tribute to his wife for whom his love transcended all belief.

Why Taj Mahal is a wonder?

Mumtaz’s body was discovered on the banks of the Yamuna River. He built the Taj Mahal over her tomb, as he promised. Even Shah Jahan’s remains was interred next to Mumtaz Tomb. Shah Jahan and Mumtaz’s love resulted in a magnificent structure that is one of the Seven Wonders of the World.

Why is it called the Taj Mahal?

The Taj Mahal was built of white marble inlaid with semi-precious stones (including jade, crystal, lapis lazuli, amethyst, and turquoise) producing elaborate designs in a technique known as pietra dura in honour of Mumtaz Mahal.