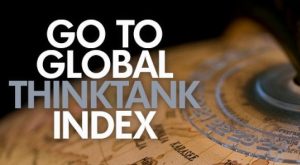 The Think Tanks and Civil Societies Program (TTCSP) of the Lauder Institute at the University of Pennsylvania administers a research on the role that policy institutes play in the governments and civil societies around the world. TTCSP determines the evolving responsibility and character of public policy research organizations. The TTCSP was formed in 1989 and has focused on gathering data and conducting research on the think tank trends and the role think tanks play as civil society actors in the policymaking process. The 2019 Global Go To Think Tank Index Report is the 14h edition of the report.

What is a Think Tank?

Think tanks are those organizations that generates policy-oriented research, analysis, and advice on issues whether domestic or international. It also enables policy makers and the public to make well informed decisions about public policy. These are affiliated or independent institutions that are structured as permanent bodies. The aim of the index is to produce an inclusive and far-reaching report of international think tanks.

Indicators used in the index:

Some important highlights for India: