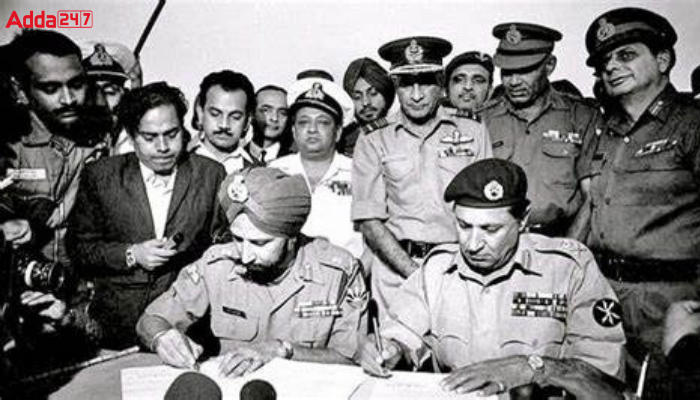 Nation celebrates Vijay Diwas, to commemorate India’s victory over Pakistan in the 1971 Bangladesh Liberation war. On this day, the heroes who sacrificed their lives for war are remembered and tributes are paid to them.

On 16th December 1971, the chief of the Pakistani forces, General Amir Abdullah Khan Niazi, along with 93 thousand troops, surrendered unconditionally to the allied forces led by Lieutenant General Jagjit Singh Aurora, in Dhaka after their defeat.

Key Points related to Celebration of Vijay Diwas in India

• The end of the war resulted in the freedom of Bangladesh.
• President Droupadi Murmu, Prime Minister Narendra Modi, Defence Minister Rajnath Singh, and Army Chief General Manoj Pande attended the At Home reception at Army House on the eve of Vijay Diwas.
• Prime Minister Modi along with Rajnath Singh also visited an exhibition on the occasion of Vijay Diwas in Delhi.
• The Prime Minister said that India will never forget the valour of the Armed Forces that led to the win in the 1971 war.

Why is Vijay Diwas Celebrated?