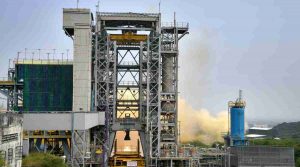 The Indian Space Research Organisation (ISRO) successfully test-fired the Vikas engine that would power India’s first human-carry rocket (Gaganyaan human space mission). This qualification test of the Vikas Engine for the Gaganyaan human space mission was conducted by ISRO at Mahendragiri, Tamil Nadu. More such tests on Vikas Engine will be conducted in the future by ISRO.

The test was carried out to verify the robustness of the engine by operating beyond its nominal operating conditions (fuel-oxidiser ratio and chamber pressure). The performance of the engine met the test objectives and the engine parameters were closely matching with the predictions during the entire duration of the test.