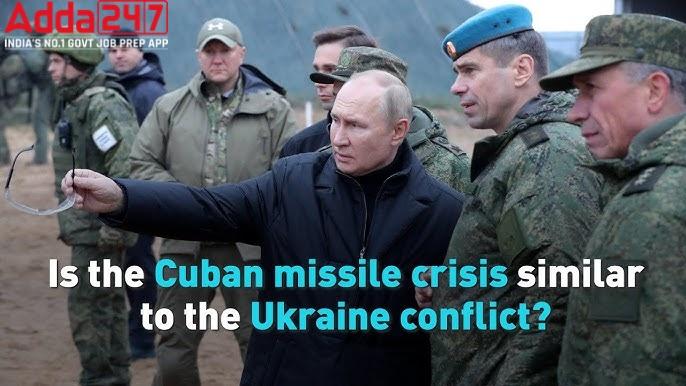 With the longest war in US modern history currently underway, risks of terrorism spread worldwide, and North Korean nuclear threats in the headlines, it’s not uncommon to hear warnings of an impending World War III. We looked back at a specific moment in history—a time when the possibility of World War III seemed imminent—that has become a foundational case study in US foreign policy and security crisis management for the past 60 years: the Cuban Missile Crisis.

What Was Cuban Missile Crisis:

The Cuban Missile Crisis of October 1962 was a direct and dangerous confrontation between the US and The USSR and was the moment when the two superpowers came closest to nuclear conflict. The crisis was unique in a number of ways, featuring calculations and miscalculations as well as direct and secret communications and miscommunications between the two sides. The dramatic crisis was also characterized by the fact that it was primarily played out at the White House and the Kremlin level with relatively little input from the respective bureaucracies typically involved in the foreign policy process.

Origins of the Cuban Missile Crisis:

Lessons Learned From This Crisis:

“That was the closest we’ve come to World War III—a nuclear World War III—and we wouldn’t be talking about it today if that had happened; there’s no way the world would have been the same. That’s why the Missile Crisis remains significant,” says Professor Philip Brenner, who has taught US foreign policy at the School of International Service (SIS) for 37 years and asserts that the traditional lessons learned from the Cuban Missile Crisis are dangerous and based on misinformation. Brenner worries that if the US found itself in a similar situation today, “like the one we’re entering with North Korea,” the outcome would likely be different from that of the Cuban Missile Crisis if US leaders followed the traditional lessons that Kennedy has been praised for.

“His aim wasn’t winning, as the traditional idea suggests. His aim was avoiding a nuclear war. Contrary to the myths of the Missile Crisis, Kennedy demonstrated an enormous capacity to be flexible and empathetic, to try to put himself in the adversary’s shoes, and to try to understand how he could help the adversary get out of the situation by saving face,” Brenner says.

For example, Kennedy adjusted the naval blockade boundaries to prevent conflict when a Soviet ship came close to the boundary line. He also agreed secretly to remove the US missiles from Turkey to placate the Soviets—a fact kept secret for 25 years.

“The real lesson is that we need to be empathetic,” says Brenner. He adds that other critical lessons learned from the Cuban Missile Crisis about minimizing risk and conflict during a crisis include the ability to be flexible and open in communication, and that the aim should be to prevent crisis, not manage it.

In 1962, the United States entered a 13-day nuclear standoff with the Soviet Union after Soviet ballistic missiles were discovered in Cuba, just 90 miles off the coast of Florida. At the time, there were similar US ballistic missiles in Turkey and Italy, well within range of the Soviet Union. In response to the discovery, the US raised its defense readiness condition to DEFCON 2, the highest state of alert short of actual war and the most severe security alert level the US has ever reached. Tense negotiations between President John F. Kennedy and Soviet First Secretary Nikita Khrushchev ensued, as well as a blockade to prevent Soviet nuclear warheads from reaching Cuba. Meanwhile, US citizens held their breath in anticipation of a nuclear Cold War.

Nearly six months into Russia’s invasion of Ukraine, the conflict’s long-term impact is coming into focus. The conflict, which began on February 24, prompted many multinational corporations to voluntarily exit or sever business ties with Russia and triggered a broad set of international sanctions. Now, much of the focus has shifted from specific developments in Ukraine and Russia to economic inflation globally and a fracturing of the geopolitical order.

Businesses and governments should not lose sight of the indirect consequences of the Russia-Ukraine conflict, which may persist for a long time. This includes the continuing risk arising from the large volume of new economic, financial, and trade sanctions and the global impact arising from the reduced availability of key commodities such as oil, fertilizer, and grain.

Claims under political risk and trade credit insurance policies typically take time to develop; the volume of claims associated with the conflict is nearly certain to increase, although that remains to be seen.

A Very Likely Article In The Above Respect Is Here, Follow The Below Link To Get More:

About NATO, NATO vs Warsaw Pact