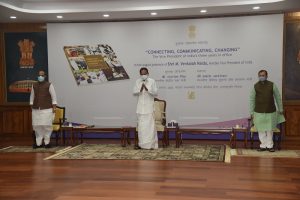 The book comprising a collection of speeches by Vice President Venkaiah Naidu. The over 250 pages book is the third series of the book and has been published by Publications Division. It provides a glimpse of his efforts and outcomes as the Vice President and Chairman of the Rajya Sabha. Apart from this, the print coffee table version of the book was also released by Union Minister of Defense Shri Rajnath Singh.