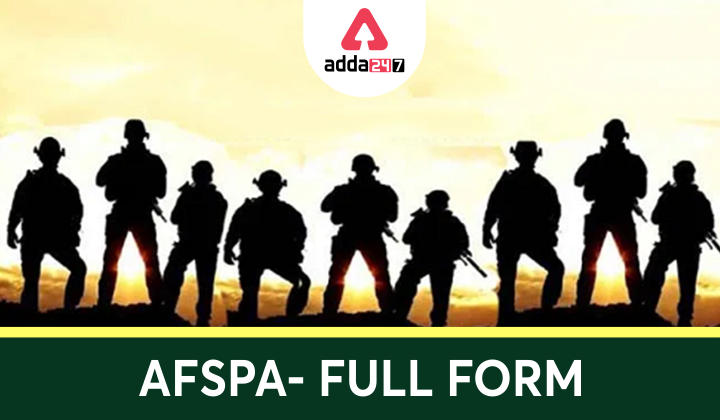 AFSPA stands for Armed Forces Special Power Act. This act was passed by the Parliament of India in 1958, which grants special powers to the Armed Forces to keep up with the service of public order in the “Disturbed areas”. When an area is declared under disturbed areas then the area has to maintain the status quo for a minimum of 6 months. On 11th September 1958, the Disturbed areas (Special courts) act was enacted in the Naga Hills, Assam (then). After this, it followed all the seven sister states in India. After this, the other act was enacted in Punjab and Chandigarh, however, it was withdrawn in 1997. In 1990, this act was also enacted in Jammu and Kashmir and has been in force since then.

In recent years, AFSPA has been removed from several areas of three north-eastern states, Nagaland, Manipur, and Assam. The government defines this step by saying that it is a result of the improved security situation and fast-tracked development due to the consistency in efforts and several agreements to end insurgency and bring lasting peace to the Northeast.

What is the purpose of AFSPA?

The Armed Forces Special Power Act enables the Armed Forces, army, state, and Central police forces, to search and destroy houses or property that is expected to be used by the insurgents in the areas which are declared as the Disturbed areas by the government. It also gives them the power to shoot and kill if the case becomes sensitive. AFSPA is enacted only when there is a case of military or insurgency takes place and the territorial integrity of India is at high risk. The act allows the Armed Forces to arrest any person without any warrant, based on reasonable suspicion, who has committed or is even about to commit a perceptible offense. When the act is enabled in an area, the armed forces are legally immune which means there will be no legal actions against them for their actions in the Disturbed areas.

1. What does AFSPA mean?
Ans. AFSPA stands for Armed Forces Special Power Act (Assam and Manipur), this act was passed on 11th September 1958. The act grants special powers in the Disturbed areas to the Armed Forces.

3. What is the history of AFSPA?
Ans. The AFSPA (Assam and Manipur) was enacted to deal with the Naga insurgency in the Assam region.