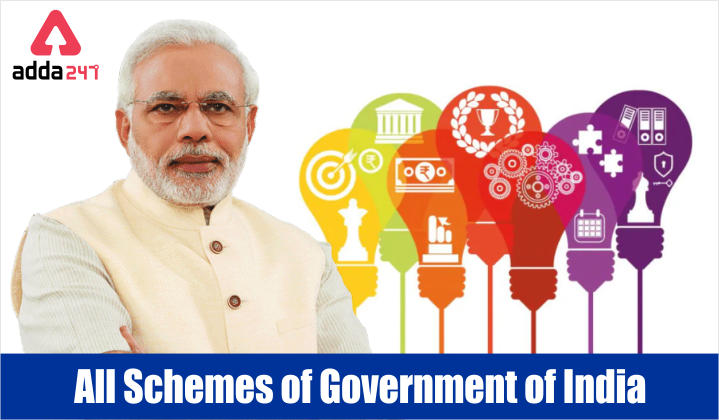 There are several schemes launched by the government of India this year. These programs help in the social and economic welfare of the nation. All Schemes of the Government of India are launched to solve many social and economic problems that are faced by the citizens. In 2022 several schemes are launched and several old schemes are re-launched with extended years of the policy. Government launches many schemes and programs every year to address the concern of citizens over issues faced by them. The central and state government invests the required amount for the commencement of the scheme and program. In this article we have discussed important government schemes in India launched in 2022.

1. Pradhan Mantri Awas Yojana (PMAY)- Pradhanmantri Awas Yojana is an initiative of the Government of India which aims to provide affordable housing to the urban people by the year 2022. The scheme was first launched on 25th June 2015. The interest rate for Pradhanmantri always Yojana starts at 6.5 0% per annum and can be availed for up to 20 years. The last date for availing Pradhanmantri Awas Yojana scheme for EWS and LIG category was extended to 31st March 2022.
Features of PMAY
-The subsidiary interest rate is 6.50 % per annum.
-Differently abled and senior citizens will be given the preference of ground floors
-The construction of houses includes sustainable and eco-friendly technology.
-In the scheme 4041 towns are included in the entire urban area of the country and 500 class 1 cities are given priority.
2. Pradhan Mantri Garib Kalyan Anna Yojana- Pradhanmantri Garib Kalyan Anya Yojana or the prime minister’s food security scheme for the poor was launched on the 26th March 2020 during the Covid-19 in India. Pradhanmantri Garib Kalyan and Yojana promise to give 5 kg rice or wheat, and 1 kg dal to each person holding a ration card. It is the largest food security program in the world. Initially, the program was for 3 months in 2020 which included 80 crore ration cards. In 2022 the union cabinet has approved the extension of the Pradhan Mantri Garib Kalyan Anna Yojana for another 4 months.

3. Meri Policy Mere Hath- It was launched under the Pradhan Mantri fasal Bima Yojana. It is a doorstep distribution drive that grants crop insurance to the farmers for upcoming seasons. The policy makes sure that farmer communities are well informed and fully equipped with information. The funds for support will be granted under the Pradhan Mantri Fasal Bima Yojana and financial support to the farmers suffering from crop loss or damage will be given. Pradhanmantri Fasal Bima Yojana launched by prime minister Narendra Modi on 18th February 2016 at Sehore Madhya Pradesh has completed 6 years

5. Support for marginal individuals for livelihood and enterprise (SMILE)- The scheme’s focus is on rehabilitation, provision of medical facilities, counseling, basic documentation, skill development, economic linkage, etc. The scheme is formulated under the ministry of social justice and empowerment and executed with the help of State Government and union territory governments community-based organizations, local urban bodies, nongovernmental organizations, institutes, and others.

3. What are the different schemes in India?
Ans. There are various schemes in India launched by the government of India which includes the health, education, agriculture, water, development, mother care, urban, financial, transport, housing, pension, and skill development sectors.

4. Which scheme started in 2000?
Ans. Annapurna scheme was launched in 2000. Under the scheme, 10 kg of food grains were given to a senior citizen who has no family support per month free of cost.

How many government schemes are there in India?

There are hundreds of government schemes in India that focus on social and economic. Every year use several schemes are launched to help the citizen conquer all the economic and social problems. All the schemes for public welfare.

What are the schemes launched by the Modi government in 2022?

What are the different schemes in India?

Annapurna scheme was launched in 2000. Under the scheme, 10 kg of food grains were given to a senior citizen who has no family support per month free of cost.

when did the Pradhan Mantri Garib Kalyan Anna Yojana come into effect?

Pradhanmantri Garib Kalyan Yojana was launched by PM Narendra Modi and it came into effect on 26 March 2020.