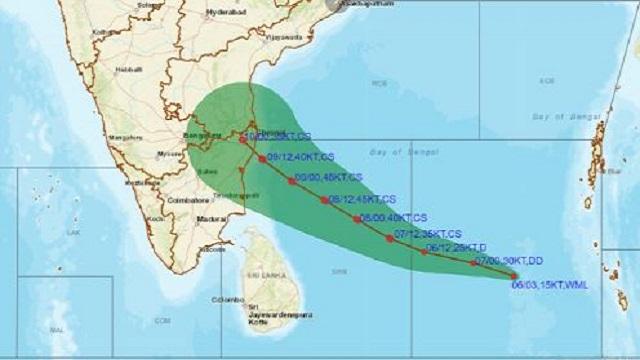 The second cyclone of the post monsoon season is likely to form over southwest Bay of Bengal and hit the east coast in Tamil Nadu, Puducherry and Andhra Pradesh, the India Meteorological Department predicted.

A low pressure area has formed over south Andaman Sea. It is likely to move west-northwestwards and become a depression over southeast Bay of Bengal by December 6 evening. It is likely to continue to move west-northwestwards, intensify further into Cyclonic storm Mandous, and reach southwest Bay of Bengal near north Tamil Nadu, Puducherry and adjoining south Andhra Pradesh by December 8 morning.

We haven’t given a forecast for landfall yet. The models will provide a clearer picture tomorrow,” said RK Jenamani, senior scientist at the weather office.

“A cyclone is likely to form, but it may weaken before reaching the coast,” said Mahesh Palawat, vice president, climate change and meteorology at Skymet Weather Services, a private forecaster. “But coastal areas of Tamil Nadu and south coastal Andhra Pradesh will get heavy showers on December 7 and 8. It’s a fast-moving weather system.” Rains will start over north coastal Tamil Nadu, Puducherry and Karaikal from December 7 midnight and will likely increase on December 8 and 9, the weather bureau said.

How Intense It Will Be:

How The Western Disturbances Will Affect:

A feeble western disturbance is likely to affect Western Himalayan region from December 7. Under its influence, isolated light to moderate rainfall likely over Jammu and Kashmir, Ladakh and Himachal Pradesh on December 8. Minimum temperature is likely to fall by 2-3 degrees Celsius over Maharashtra in the next three days and rise by 2-3 degrees thereafter.

No significant change in minimum temperatures is likely over northern parts of the country in the next 4-5 days. Dense fog likely in isolated pockets over Himachal Pradesh in the morning and over Punjab and Haryana in the next 24 hours.

Read The Below Article To Know More About The Monsoon: