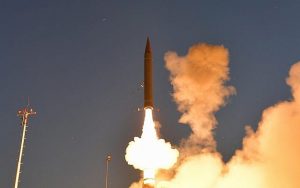 The test was performed at a test site in central Israel, and led by Israel Aerospace Industries (IAI). It was developed in a joint project between the Defense Ministry’s Missile Defense Organization and the American Missile Defense Agency.

The Arrow 3 was first tested successfully in February 2018, after months of delays and technical problems. It is considered one of the most powerful weapons of its kind in the world and has been in development since 2008.