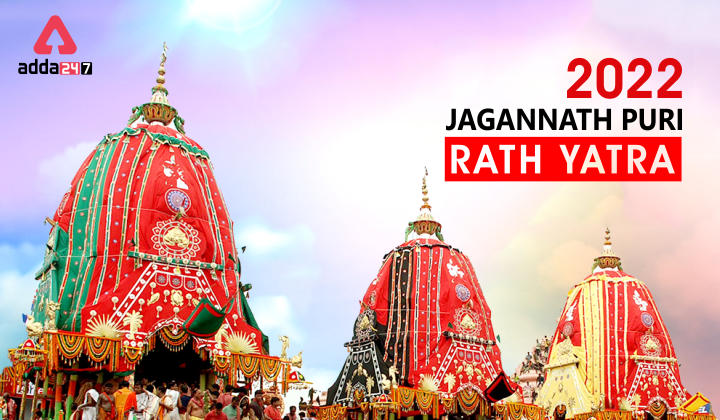 Rath Yatra of Puri is the annual chariot festival of Odisha which is traditionally known as Puri Rath Yatra. The Puri Rath Yatra 2022, has begun with devotion and traditions all over Odisha. The Chariot festival is dedicated to Lord Jagannath, his brother Balbhadra and his sister Subhadra. The journey of the deities begins from the iconic Puri Temple and reaches the Gundicha Shrine after twelve the Lord returns to his adobe. The idols of the three deities are brought out by three priests out of the sanctum sanctorum or Garbha Griha and carried to Gundicha Shrine in three giant wooden chariots.

The Raths or the Chariots are huge and the priests and devotees pull the three Raths with immense devotion. Devotees eagerly wait for Rath Yatra to pull the gigantic Raths of Lord Jagannath, Balbhadra, and Subhadra. Here, the diversity of people will leave you mesmerized. People from any caste, any gender, any background, and any age are allowed to pull the Raths of the three deities. The Rath Yatra is also telecasted live from Puri to all over India. You can connect with the live event on DD-Odia, DD-Bharati, and DD-India and enjoy the virtual Darshan of Lord Jagannath.

The three chariots of the deities are constructed every year with wood from specific trees such as Phassi and Dhausa. There is a specialist carpenter team for bringing the wood for making the Raths of the deities from the ex-princely state of Dasapalla. The logs brought by them are traditionally set afloat as rafts in the Mahanadi River. The three chariots are decorated with specific and unique instructions given below in the table from years.

On Akshaya Tritiya, the construction of the chariot begins, with a ritual of fire worship. The ritual takes place in front of the palace of the King of Puri. This day also marks the new agricultural season for the farmers of Odisha and they start plowing their fields it also marks the beginning of the summer festival of the deities which is known as the Sandalwood festival or Chandan Yatra. The Chandan Yatra lasts three weeks and, in this festival, the representative image of the presiding deities are taken out in color processions and given a ceremonial boat ride in the Narendra Pokhri every day. There is an interesting demonstration of the assimilative character of the Jagannath cult, Madanmohan and Rama-Krishna, representing Jagannath and Balarama partake in the festival with the representative images of the presiding deities of five main Shiva temples in Puri. These are known as Pancha Pandava, the five brothers of the Mahabharata. Later, the deities are given a ritual bath in a small temple in the middle of the tank, in stone tubes filled with water, sandalwood paste, scents, and flowers.

The Suna Besha is celebrated when the Chariots of the deities return to the main temple after returning from the Gundicha temple. The deities are attired in gold ornaments and worshipped on the Chariots.  It is known that traditionally this ritual was started by King Kapilendra Deb in 1460 when after returning victorious from the war he donated gold to Jagannath. Nearly, 208 kg of gold jewelry is decorated on the three deities.