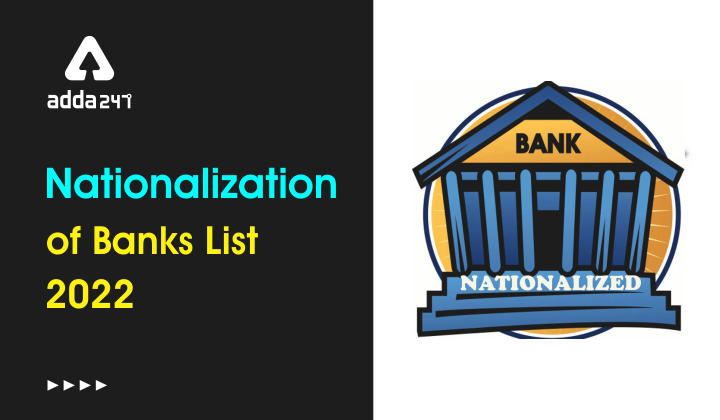 In the modern era, banking started in the colonial period with the establishment of the Bank of Hindustan which was established in the year 1770. Post-independence, the government of India took numerous steps to improve the country’s economic development, and one of the major steps they took was establishing RBI in April 1935. Later in 1948, under the terms of the RBI Act, they gave notice to nationalized the banks and then in 1949.

After Independence, the banking sector was being regulated by the Reserve Bank of India which is the central authority. By this time only the State Bank of India was a major government bank and the rest were private-owned. To meet the need of the Indian economy, the banks were nationalized in the years 1969 and 1980.

What is Nationalised bank?

The nationalized banks are those banks that were ones owned by the private players but due to the financial or socio-economic exigencies, the ownership was acquired by the government. In more technical terms Nationalised Banks have such an ownership structure where the government is the majority shareholder i.e. >50%.

Why banks were Nationalised?

Bank Nationalization is a policy decision, which is undertaken keeping certain goals in mind. From time to time Central Government can carry out the nationalization of banks. Though candidates must note that Nationalization as a policy call has lost the favour of Governments post-liberalization of 1991. Nariman committee on banking reforms 1991 and 1998  has called for more private banks in India.

In this article, we have an updated list of Government banks in India along with a merged banks list as of 2022.

Let’s have a look at each Public Sector bank individually:

State Bank of India is the largest bank in India. SBI is ranked 236th on the Fortune Global 500 list. The bank was founded in 1955. With the merger with its 5 associates banks, SBI has the largest branches network in India.

Punjab National Bank is a banking and financial services bank owned by the Government of India. The bank was established in 1894. PNB bank is merged with OBC Bank and United Bank. The new bank will become the second-largest Public Sector Bank of India with 18 Lakh crore rupees and the second largest in terms of branch network across the country.

Canara Bank is one of the oldest public sector banks in India. The bank was founded in 1906 by the name Canara Hindu Permanent Fund but later changed its name to Canara Bank Limited in 1910. Canara Bank will merge with Syndicate Bank to become the fourth largest Public Sector Bank in the country. The total business of the bank will be Rs.15.2 lakh crore. It will also become the third-largest bank branch network in India.

Union Bank of India is one of the largest public sector banks in India. The government holds 90% of its share capital. The bank was founded in 1919. With Merger of Andhra Bank and Corporation Bank.

Bank of India is the founder member of SWIFT (Society for Worldwide Inter Bank Financial Telecommunications) and one of the top 5 banks in India.

Indian Bank has overseas branches in Colombo and Singapore. It was founded in 1907. With Merger of Allahabad Bank.

Central Bank of India was one of eighteen public sector banks that get recapitalized in 2009. It is founded in 1911.

Indian Overseas Bank has 6 foreign branches and a representative office. It was founded in 1937.

UCO Bank is one of the major government-owned commercial banks of India. It was founded in 1943. UCO bank recently launched its Whatsapp banking.

Bank of Maharashtra is a major public sector bank. The Government of India has 87.74% shares of this bank. It is founded in 1935.

Punjab and Sind Bank is emerging as a techno-savvy public sector bank of India. It was founded in 1908.

Q1. How many public sector banks are there in India in 2022?

Q2. How many nationalized banks are there in India in 2021?

Ans. Currently in India there are 12 banks in number that are nationalised, and their names are Punjab National Bank, Bank of Baroda, Bank of India, Central Bank of India, Canara Bank, Union Bank of India, Indian Overseas Bank, Punjab, and Sind Bank, Indian Bank, UCO Bank, and Bank of Maharashtra, State Bank Of India.

Q4. List the banks which are nationalised for 14 years?