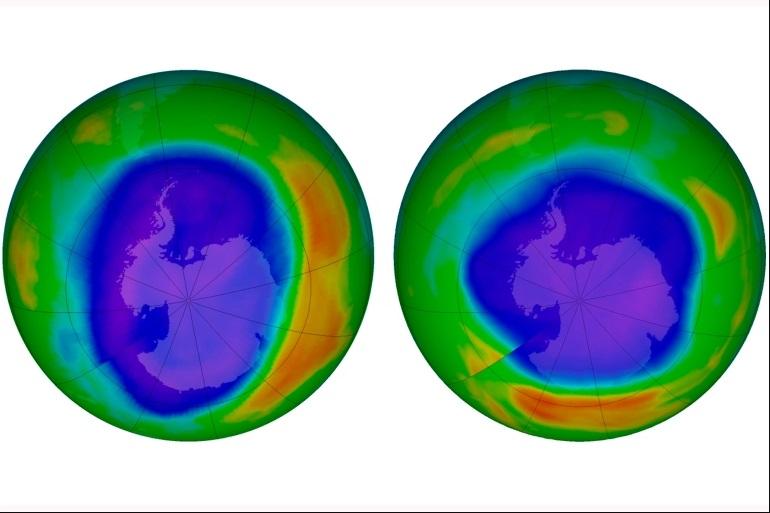 The Earth’s protective ozone layer is on track to recover within four decades, closing an ozone hole that was first noticed in the 1980s, a United Nations-backed panel of experts announced on Monday. The findings of the scientific assessment, which is published every four years,more than 35 years after every nation in the world agreed to stop producing chemicals that chomp on the layer of ozone in Earth’s atmosphere that shields the planet from harmful radiation ,follow the landmark Montreal Protocol in 1987, which banned the production and consumption of chemicals that eat away at the planet’s ozone layer.

The ozone layer or ozone shield is a region of Earth’s stratosphere that absorbs most of the Sun’s ultraviolet radiation. It contains a high concentration of ozone (O3) in relation to other parts of the atmosphere, although still small in relation to other gases in the stratosphere. The ozone layer contains less than 10 parts per million of ozone, while the average ozone concentration in Earth’s atmosphere as a whole is about 0.3 parts per million. The ozone layer is mainly found in the lower portion of the stratosphere, from approximately 15 to 35 kilometers (9 to 22 mi) above Earth, although its thickness varies seasonally and geographically. The ozone layer in the upper atmosphere protects the Earth from the sun’s ultraviolet radiation, which is linked to skin cancer, eye cataracts, compromised immune systems and agricultural land damage.

The Montreal Protocol on Substances that Deplete the Ozone Layer is the landmark multilateral environmental agreement that regulates the production and consumption of nearly 100 man-made chemicals referred to as ozone depleting substances (ODS). When released to the atmosphere, those chemicals damage the stratospheric ozone layer, Earth’s protective shield that protects humans and the environment from harmful levels of ultraviolet radiation from the sun. Adopted on 16 September 1987, the Protocol is to date one of the rare treaties to achieve universal ratification.