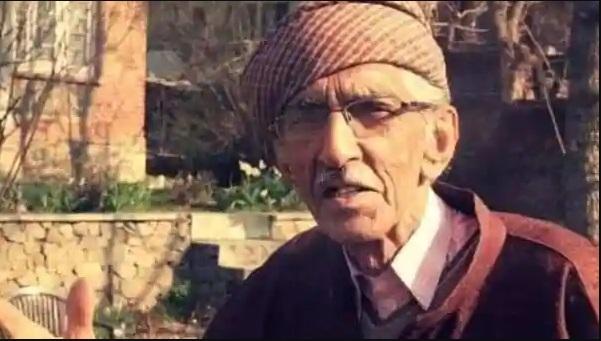 Professor Rehman Rahi, renowned poet and Kashmir’s first Jnanpith awardee took his last breath in the early hours on Monday at his residence in the Nowshera area of Kashmir. At the time of his death, the globally acclaimed poet was 98 years old. He is survived by four children.

The Sahitya Akademi Award is a literary honour in India, which the Sahitya Akademi, India’s National Academy of Letters, annually confers on writers of the most outstanding books of literary merit published in any of the 22 languages of the 8th Schedule to the Indian constitution as well as in English and Rajasthani language.

Established in 1954, the award comprises a plaque and a cash prize of ₹ 1,00,000. The award’s purpose is to recognise and promote excellence in Indian writing and also acknowledge new trends. The annual process of selecting awardees runs for the preceding twelve months. The plaque awarded by the Sahitya Akademi was designed by the Indian film-maker Satyajit Ray. Prior to this, the plaque occasionally was made of marble, but this practice was discontinued because of the excessive weight. During the Indo-Pakistan War of 1965, the plaque was substituted with national savings bonds.

Padma Shri , also spelled Padma Shree, is the fourth-highest civilian award of the Republic of India, after the Bharat Ratna, the Padma Vibhushan and the Padma Bhushan. Instituted on 2 January 1954, the award is conferred in recognition of “distinguished contribution in various spheres of activity including the arts, education, industry, literature, science, acting, medicine, social service and public affairs”. It is awarded by the Government of India every year on India’s Republic Day.

The Jnanpith Award is the oldest and the highest Indian literary award presented annually by the Bharatiya Jnanpith to an author for their “outstanding contribution towards literature”. Instituted in 1961, the award is bestowed only on Indian writers writing in Indian languages included in the Eighth Schedule to the Constitution of India and English, with no posthumous conferral.

From 1965 till 1981, the award was given to the authors for their “most outstanding work” and consisted of a citation plaque, a cash prize and a bronze replica of Saraswati, the Hindu goddess of knowledge and wisdom. The first recipient of the award was the Malayalam writer G. Sankara Kurup who received the award in 1965 for his collection of poems, Odakkuzhal (The Bamboo Flute), published in 1950. The rules were revised in subsequent years to consider only works published during the preceding twenty years, excluding the year for which the award was to be given and the cash prize was increased to ₹1.5 lakh (equivalent to ₹26 lakh or US$33,000 in 2020) from 1981.

As of 2015, the cash prize has been revised to ₹11 lakh (equivalent to ₹14 lakh or US$18,000 in 2020) and out of twenty-three eligible languages the award has been presented for works in sixteen languages: Hindi (eleven), Kannada (eight), Bengali and Malayalam (six each), Gujarati, Marathi, Odia, and Urdu (four each), Assamese and Telugu (three each), Punjabi, Tamil and Konkani (two each), English, Kashmiri and Sanskrit (one each). The award has been conferred upon fifty-eight writers including seven women authors. In 1976, Bengali novelist Ashapoorna Devi became the first woman to win the award and was honoured for the 1965 novel Prothom Protishruti (The First Promise), the first in a trilogy. The most recent recipients of the award are Assamese poet Nilmani Phookan and Konkani writer Damodar Mauzo, awarded for the years of 2021 and 2022 respectively.