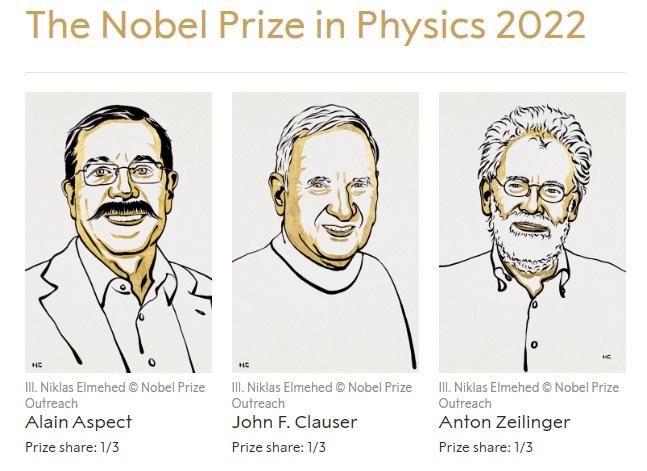 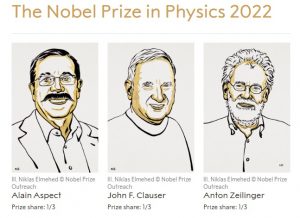 The Royal Swedish Academy of Sciences announced, the Nobel Prize in Physics 2022 was awarded to Alain Aspect (France), John F. Clauser (USA) and Anton Zeilinger (Austria) for their work on quantum mechanics. The 2022 Nobel Prize in Physics has been awarded “for experiments with entangled photons, establishing the violation of Bell inequalities, and pioneering quantum information science,”.

Nobel Prize 2022: About the research

The 2022 physics laureates’ development of experimental tools has laid the foundation for a new era of quantum technology. Being able to manipulate and manage quantum states and all their layers of properties gives us access to tools with unexpected potential.

This year’s Nobel Prize laureate John Clauser built an apparatus that emitted two entangled photons at a time, each towards a filter that tested their polarization. The result was a clear violation of a Bell inequality and agreed with the predictions of quantum mechanics.

Alain Aspect, developed a setup to close an important loophole. He was able to switch the measurement settings after an entangled pair had left its source, so the setting that existed when they were emitted could not affect the result.

Anton Zeilinger, 2022 Nobel Prize laureate in physics, researched entangled quantum states. His research group has demonstrated a phenomenon called quantum teleportation, which makes it possible to move a quantum state from one particle to one at a distance.

About the Nobel Prize for Physics:

The Nobel Prize for Physics is awarded, according to the will of Swedish inventor and industrialist Alfred Bernhard Nobel, “to those who, during the preceding year, shall have conferred the greatest benefit on mankind” in the field of physics. It is conferred by the Royal Swedish Academy of Sciences in Stockholm.