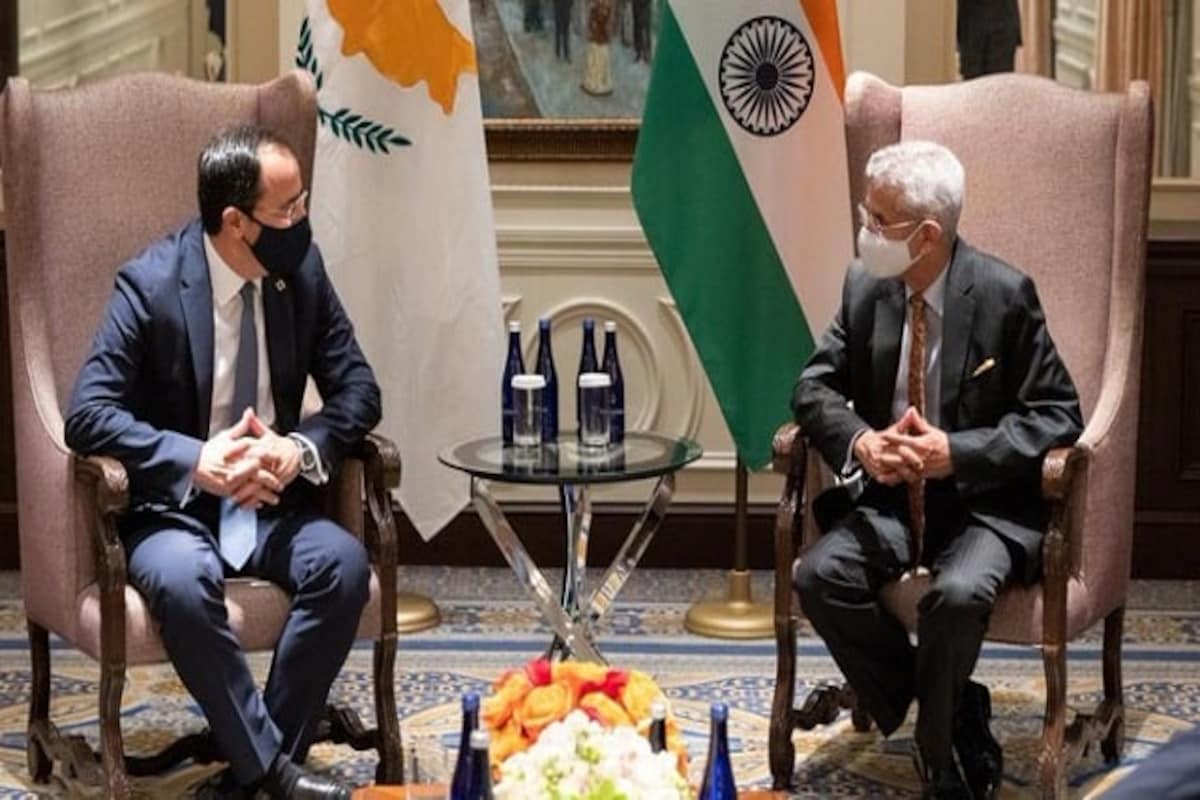 Turkey is embroiled in the confrontation on the divided island of Cyprus between its ethnic compatriots who hold the breakaway northern part of it and the Greek Cypriots. In a tweet after the meeting with Turk Foreign Minister, Jaishankar said they held a “wide-ranging conversation that covered the Ukraine conflict, food security, G20 processes, global order, NAM (Non-aligned Movement) and Cyprus”.

In his speech, Erdogan struck a neutral-sounding stance and said: “We hope and pray that fair and permanent peace and prosperity will be established in Kashmir.” He avoided internationalising Kashmir by even invoking UN resolutions as he had last year or criticising India in strong terms in the years before that. Besides Pakistani politicians, Erdogan is the only other leader to mention Kashmir in recent years in speeches at the 193-member Assembly.

Cyprus is an island nation in the eastern Mediterranean Sea and ever since the Turkish invasion in 1974, has been partitioned into the Greek-majority Republic of Cyprus (ROC) and the Turkish Republic of Northern Cyprus (TRNC). The ROC, which occupies two-thirds of the island, is internationally recognised while the TRNC, which occupies one-third of the north, is only recognised by Turkey. In 2004, the ROC joined the European Union.

The island has also been long plagued by ethnic divisions between its Greek and Turkish inhabitants. In 2015, the total population of Cyprus was estimated to be 9.4 lakh, with 74.5 per cent Greek Cypriots and 9.8 per cent Turkish Cypriots. Foreign nationals comprised 15.7 per cent of the population. In the 47 years since the island’s independence from the British, reunification talks and even two-state settlements have made little progress.

From Ottoman to British rule to Turkish invasion:

Cyprus is located south of Turkey and southeast of Greece. Like India, it too was a British colony. From 1571 until 1878, the island was under Ottoman rule. Under the 1878 Cyprus Convention, the Ottoman Turks handed over the administration of the island to Britain in exchange for guarantees that the Ottoman Empire would be protected against possible Russian aggression. In 1914, the British annexed the island and ruled until 1960, granting independence to Cyprus under a power-sharing constitution between its Turkish and Greek inhabitants.

In 1974, the military junta in Greece backed a coup against then Cypriot President Makarios, and laid the ground for Turkish invasion. It successfully occupied the northern third of the island. In 1983, Rauf Denktas, a prominent Turkish Cypriot politician and barrister, declared the Turkish Republic of Northern Cyprus and went on to serve as the first president of the breakaway territory.

At the time, the UN Security Council denounced the new government as “invalid” and in violation of the 1960 Treaty. The United Nations intervened after the invasion and with the country effectively partitioned, established a buffer zone called ‘Green Line’. Today, UN troops patrol the Green Line and barbed wire and trenches run through the capital, Nicosia.

No solution in sight after nearly four decades:

In the 38 years since Turkish Cypriots declared Northern Cyprus a Turkish republic, UN-led peace talks have been unsuccessful. Greek Cypriots have usually batted for the reunification of the island while their Turkish counterparts have pushed for a two-state solution. In April this year, UN-led talks sought to resume negotiations to reunify Cyprus but hit a dead end. “There will not be negotiations so long as the Greek Cypriots are treated as if they are the Republic of Cyprus and so long as the Turkish Cypriots are treated as if we are nothing other than a mere community of that Republic,” Turkish Cypriot foreign minister Tahsin Ertugruloglu said.

In 2015, President of the Republic of Cyprus, Nicos Anastasiades, resumed talks with Turkish Cypriot leader Mustafa Akinci on reunification of the island but that too proved unsuccessful. In August this year, President of Northern Cyprus Ersin Tatar spoke out against the Greek Cypriot government’s decision to rescind passports of senior Turkish Cypriot officials. He called the move “an assault on the efforts to find a settlement”.

Tatar, like many other Turkish Cypriots who were born when the island attained independence from the British, holds a Cyprus passport but refuses to recognise the republic south of the Green Line. The Greek-controlled government’s decision to rescind passports of senior Turkish Cypriot officials was seen as a response to Tatar’s announcement a month prior that his administration would move ahead with plans to open part of Varosha. Varosha used to be a bustling tourist hub, but was later abandoned during the Turkish invasion in 1974.