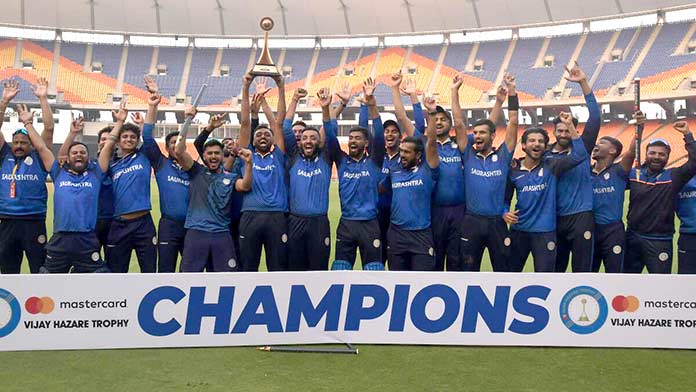 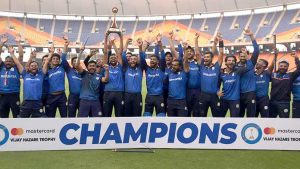 Saurashtra beat Maharashtra by 5 wickets in the final to win the Vijay Hazare Trophy at the Narendra Modi Stadium in Ahmedabad, Gujarat. They restricted Maharashtra at 248/9 in 50 overs as captain Ruturaj Gaikwad hit a century, scoring 108 off 131 balls after a slow start. Saurashtra bowler Chirag Jani claimed a hat-trick in the match. Man of the moment is Sheldon Jackson

Chasing the target of 249, Saurashtra started off cautiously before the openers sitiched a 125-run partnership. Batter Shledon Jackson held one end as wickets tumbled around him. He scored a match-winning 133 off 136 balls to help Saurashtra chase down the target in 46.3 overs, with five wickets to spare. It was Saurashtra’s second title triumph in history.

Notably: The win enhanced Jaydev Unadkat’s credentials as captain, he had led Saurashtra to their first Ranji Trophy title in 2019-2020. He also finished at the top of the wicket-taking charts in the Vijay Hazare Trophy with 19 strikes to his name.