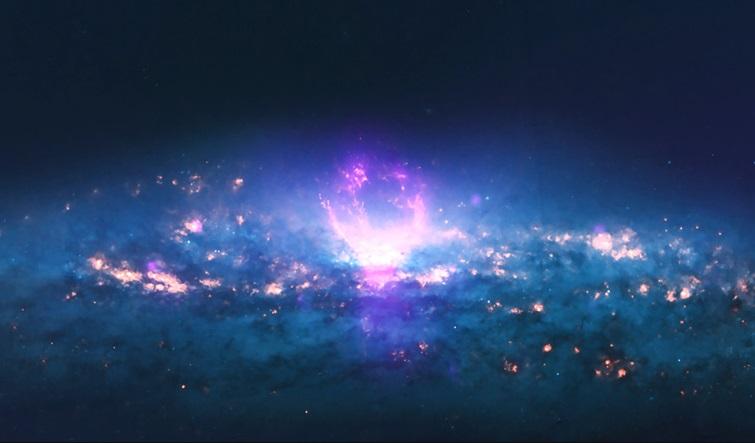 Detection of a Radio Signal:-

Astronomers from McGill University in Canada and the Indian Institute of Science (IISc) in Bengaluru have used data from the Giant Metrewave Radio Telescope (GMRT) in Pune to detect a radio signal originating from atomic hydrogen in an extremely distant galaxy.

Gravitational lensing occurs when a massive celestial body — such as a galaxy cluster — causes a sufficient curvature of spacetime for the path of light around it to be visibly bent, as if by a lens. The body causing the light to curve is accordingly called a gravitational lens.

According to Einstein’s general theory of relativity, time and space are fused together in a quantity known as spacetime. Within this theory, massive objects cause spacetime to curve, and gravity is simply the curvature of spacetime. As light travels through spacetime, the theory predicts that the path taken by the light will also be curved by an object’s mass. Gravitational lensing is a dramatic and observable example of the Einstein’s theory in action

The Giant Metrewave Radio Telescope (GMRT), located near Pune, Junnar, near Narayangaon at khodad in India, is an array of thirty fully steerable parabolic radio telescopes of 45 metre diameter, observing at metre wavelengths. It is operated by the National Centre for Radio Astrophysics (NCRA), a part of the Tata Institute of Fundamental Research, Mumbai. It was conceived and built under the direction of Late Prof. Govind Swarup during 1984 to 1996. It is an interferometric array with baselines of up to 25 kilometres. It was recently upgraded with new receivers, after which it is also known as the Upgraded Giant Metrewave Radio Telescope (uGMRT).

The National Centre for Radio Astrophysics (NCRA) of India is a research institution in India in the field of radio astronomy is located in the Pune University Campus (just beside IUCAA), is part of the Tata Institute of Fundamental Research, Mumbai, India. NCRA has an active research program in many areas of Astronomy and Astrophysics, which includes studies of the Sun, Interplanetary scintillations, pulsars, the Interstellar medium, Active galaxies and cosmology and particularly in the specialized field of Radio Astronomy and Radio instrumentation. NCRA also provides exciting opportunities and challenges in engineering fields such as analog and digital electronics, signal Processing, antenna design, telecommunication and software development. NCRA has set up the Giant Metrewave Radio Telescope (GMRT), the world’s largest telescope operating at meter wavelengths located at Khodad, 80 km from Pune. NCRA also operates the Ooty Radio Telescope (ORT), which is a large Cylindrical Telescope located near Udhagamandalam, India.