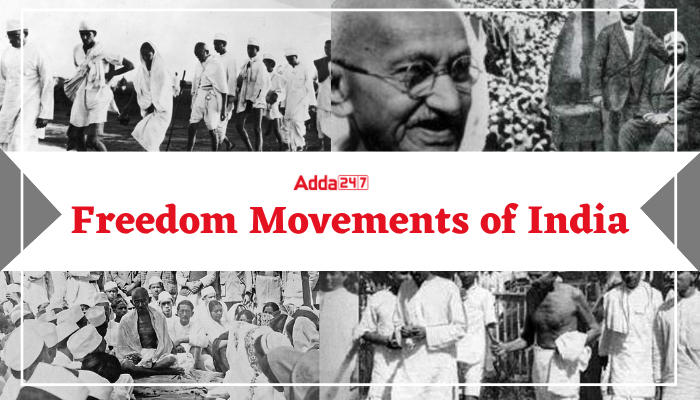 Several movements were unsuccessful however, they were powerful enough to move the roots of the British Government in India. The ultimate goal of all the freedom movements was to get complete independence from British rule.

Freedom Fighters Of India And The Revolt Of 1857

The Revolt of 1857 was the first war of Independence against the British. The revolt began in Meerut on 10th May 1857. The movement slowly spread to Delhi, Agra, Kanpur, and Lucknow. Though it was the first step of the fight against the British and the first Indian freedom movement, it was unsuccessful. However, it has a significant impact on the masses and inspired the sentiments of the Indian citizens to join hands for the Independence movement.

This independence movement marked the end of rule by the British East India Company which earlier had direct control over India. The revolt completely shook the foundation of British rule in India and disclosed their inefficiency in handling the Indian administration. The Government of India Act, of 1858 abolished the rule of the British East India Company. The Revolt failed due to a lack of one clear leader and no planning.

The Swadeshi movement was started after the announcement of Lord Curzon about the partition of Bengal in 1905. The British government declared the division of Bengal into two provinces to undermine national unity. On 7th August 1905, the Boycott resolution was adopted during the conference held at the Calcutta Town Hall.

This established the Swadeshi movement and brought the fragmented leadership together. The Swadeshi movement aimed to encourage the usage of local goods and services. The movement began violently when British products were openly torched. The British government started detaining the agitators to address the issue and as a result, Bengal was partitioned.

The Ghadar Movement brought a significant change in the scenario of the Indian freedom movements. People from Punjab immigrated to North America especially to Canada and United States to work in fields and factories in the 1900s. They were introduced to the idea of forming workers’ unions to oppose the unfavorable policies implemented by the British Government.

This ideology led to the formation of the Pacific Coast Hindustan Association also known as the Ghadar Party. In the early 20th Century, several stringent immigration laws based on racial discrimination were put in place to reduce the number of Indian immigrants coming to Canada in search of employment. The ship carrying immigrants was sent back from Canada. The passengers were killed during a clash with British police. The brutal act of the British government started the Ghadar Movement. In 1917, the Ghadar party split into the communist party and the socialist party following the end of world war I.

The Home Rule Movement served as the country’s response to the first world war. The home Rule Movement was started by Bal Gangadhar Tilak in Belgium in April 1916. The movement was later joined by Annie Besant in Madras in September 1916. The movement aimed to achieve self-rule without the interference of the British Government. It demonstrated the strength of India and its people by raising political awareness. The movement also resulted in the 1917 Montague Declaration.

Champaran Movement was started by Mahatma Gandhi. It was Mahatma Gandhi’s first act of civil disobedience during the freedom struggle in India. It took place in the Champaran district of Bihar in 1917. Indigo farmers of the Champaran district of Bihar have miserable conditions under the Tinkathiya System. The Tinkathiya System forces the farmers or cultivators to cultivate indigo on the best 3/20th part of their land and forces them to sell it at a cheaper price.

Rajkumar Shukla decided to meet Mahatma Gandhi and ask him for help. He went to Lucknow and invited Gandhiji. Mahatma Gandhi reached Champaran and approached the civil disobedience movement. He launched strikes and demonstrated against the landlords in Champaran.

The Anarchical and Revolutionary Crimes Act of 1919 was passed by the British Indian government and is known as Rowlatt Act. The Act granted the government the authority to imprison anyone accused of engaging in terror activities for up to two years without a trial. The freedom of the press was restricted by the Rowlatt Act.

On 6th April 1919, Mahatma Gandhi began a non-violent Satyagraha against the Rowlatt Act imposed by the British government. This movement was also known as Rowlatt Satyagraha. During this movement, a nationwide hartal was declared and people were asked to hold meetings against the repressive actions and refrain from going to work. The hartal was successful in Delhi, and Punjab witnessed violence. Gandhi ji later suspended the Hartal.

The Khilafat Movement was started by the Ali brothers. The movement was to show denial and protest against the unjust done with Turkey after the first world war. The protest movement was launched by Mahatma Gandhi against British rule. The movement demanded to restore the collapsing status of the Caliph in Turkey.

The Civil Disobedience Movement was started by Mahatma Gandhi in 1930 and is credited for paving the way for freedom in India. The movement was launched after the observance of Independence Day in 1930.

The movement commenced with the Dandi March on 12th March 1930. Gandhi ji with 78 other members left Sabarmati Ashram on foot and reached Dandi to break the salt law. The production of salt was considered illegal and was controlled by the government. After this event, the civil disobedience movement was accepted all across the country.

The leaders of the Indian National Congress (INC) were dissatisfied with the British government for dragging India into the second World War without the consent of the Indian people. The Individual Satyagraha was started by Mahatma Gandhi after INC demanded complete freedom from colonial rule. The first three satyagrahis were Brahma Datt, Vinoba Bhave, and Jawaharlal Nehru.

The Indian National Congress launched the Quit India Movement after the arrival of the Cripps Mission which arrived in India in March 1942, and it was not able to promise any type of constitutional remedy for India’s issues. Mahatma Gandhi began the Quit India movement in August 1942 to compel the British to leave India.

The movement is also known as ‘Bharat Chhodo Andolan’. The Congress declared an unlawful association and its offices all over the country were raided. The leaders were arrested, and a chaotic atmosphere raised in India. The movement placed the demand for complete Independence.

1. What is the history of the freedom movement in India?
Ans. The Indian freedom movements started in 1857 with the revolt of 1857. The first war of independence against British rule. It began in Meerut against the East India Company.

What is the history of the freedom movement in India?

The Indian freedom movements started in 1857 with the revolt of 1857. The first war of independence against British rule. It began in Meerut against the East India Company.

Which act was known as the 'Black Bill'?

The Rowlatt Act was known as the 'Black Bill' during the Indian Freedom Struggle.

Who started the Khilafat Movement?

The Ali brothers started the Khilafat Movement which was later joined by Mahatma Gandhi.

When did the Indian freedom struggle start and end?

What caused Indian Muslims to participate in the Indian freedom movement?

Indian Muslims participated in the Khilafat Movement against the British. They later joined the Non-cooperation Movement.