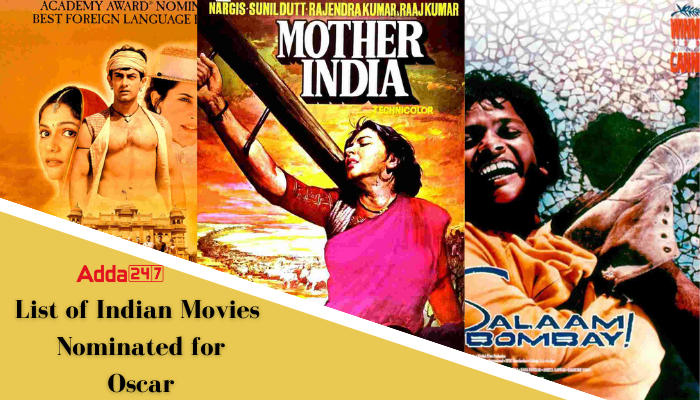 Mother India was directed by Mehboob Khan in 1957. It is the first Indian film that was nominated for an Oscar for ‘Best International Feature Film’. Mother India starred Raaj Kumar, Nargis, Sunil Dutt, and Rajendra Kumar.

The plot of movie shows the story of a poverty-stricken village woman Radha. Her struggles are portrayed in the film, how she raised her sons in the absence of her husband against the cruel world.

Salaam Bombay was directed by Mira Nair in 1988. It was the second will that was nominated for Oscar. The movie was one of the most remarkable works of Mira Nair. The movie depicts the daily lives of children living in the Mumbai slums.

Lagaan was directed by Ashutosh Gowariker. It was the last Indian film that was nominated for an Oscar. The film starred Aamir Khan and Gracy Singh in the lead roles. The story of Lagaan was inspired by the late Victorian era of India’s Colonial British Raj. The film is about a cricket match between the Britishers and the villagers. The cricket match was the only chance for the villagers to get rid of years of drought and high taxes.

Also Read: Nobel Prize In Physics: Complete List Of Winners From 1901 To 2022

FAQs related to the Indian Movies nominated for Oscar

5. When are the Oscar Awards 2023?
Ans. Oscar Awards will be held on 12th March 2023 at the Dolby Theatre, Hollywood, Los Angeles, California, USA.

How many Indian movies have been nominated for the Oscars?

There are only three Indian movies that are nominated for the Oscars including Mother India, Salaam Bombay, and Laagan.

Which Indian film has been nominated for Best Original Score?

Salaam Bombay and Laagan have been nominated for best original score.

How many Indian films have been nominated for Golden Globes?

Why are Indian films nominated for Oscar?