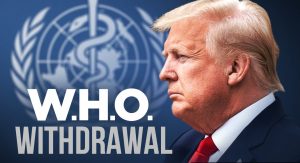 The United States has formalized to withdraw from the World Health Organization (WHO) on July 6, 2021. The actual project of disentangling the U.S. from WHO began on July 6, 2020, with a letter signed by Secretary of State Mike Pompeo. It will take one year to go into effect.

Why United States decide to withdraw from the WHO?