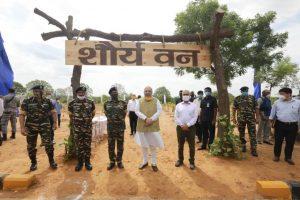 Under this drive, saplings were planted by the jawans of Central Armed Police Forces in Chhattisgarh. The personnel of BSF, CRPF, ITBP and CISF – deployed in Chhattisgarh for Anti-Naxal operations, planted saplings in their respective campuses as well as in their places of deployment. All the CAPFs will undertake a drive in their respective organisations to achieve the collective target of planting more than 1.35 crore saplings by this month.