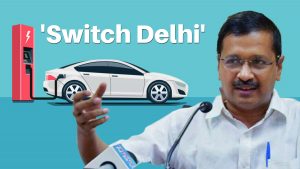 Delhi Chief Minister, Arvind Kejriwal has launched the ‘Switch Delhi’ campaign to promote electric vehicles and appealed to people to buy such vehicles to combat pollution in the city. Kejriwal said his government will hire only electric vehicles for various purposes in the next six weeks.

About the ‘Switch Delhi’ campaign: