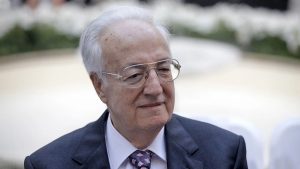 Former Greek President Christos Sartzetakis has passed away at the age of 92 years due to respiratory failure in Athens, Greece. He was a Greek jurist and a judge of the Supreme Court, who resisted against the militants during the 1967-1974 Rule of the Colonels. He served as the President of Greece for a four-year term (1985 to 1990), after getting nominated by the socialist PASOK party.