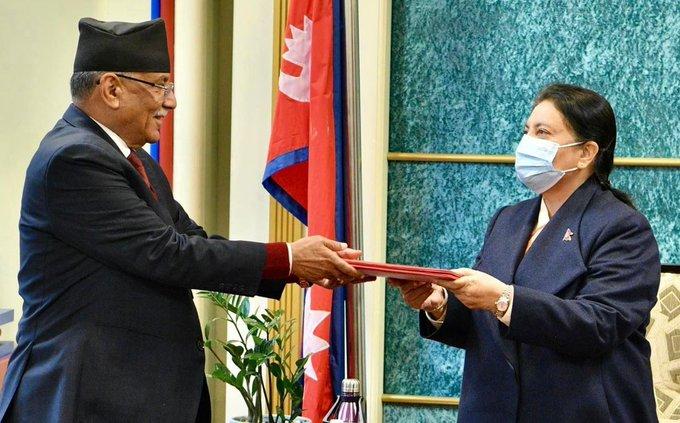 In a swift move, CPN-Maoist Centre chief Pushpa Kamal Dahal, also known as Prachanda, mustered the support of 168 parliamentarians, way above the magic mark of 138 in the House of Representatives, clearing the way for his third stint in the Nepal Prime Minister’s Office in the last 14 years. President Bidya Devi Bhandari appointed Prachanda as the prime minister as per Article 76 (2) of the constitution.

After he snapped ties with the ruling coalition led by Sher Bahadur Deuba, Prachanda went to the President’s office in the company of KP Sharma Oli, chief of the Communist Party of Nepal – Unified Marxist Leninist (UML), with a list of supporters from seven political parties.

Nepal has seen 10 government changes since 2008 when the 239-year-old monarchy was abolished.

The parties supporting Prachanda include pro-monarchy Rastriya Prajatantra Party, newly born Rastriya Swatantra Party, Janata Samajbadi Party, regional outfits like Jamat Party and Nagarik besides the UML and the CPN-Maoist Centre. The list was submitted well within the deadline President Bidhya Devi Bhandari had set for claimants to form the government.

Prachanda has support of 165 lawmakers in the 275-member House of Representatives which includes CPN-UML with 78, CPN-MC with 32, RSP with 20, RPP with 14, JSP with 12, Janamat with 6 and Nagarik Unmukti Party with 3.

Born in Dhikurpokhari of Kaski district near Pokhara on December 11, 1954, Prachanda remained underground for almost 13 years. He joined mainstream politics when the CPN-Maoist adopted peaceful politics, ending decade long armed insurgency. He led the decade-long armed struggle from 1996 to 2006 that ultimately ended with signing of the Comprehensive Peace Agreement in November 2006.