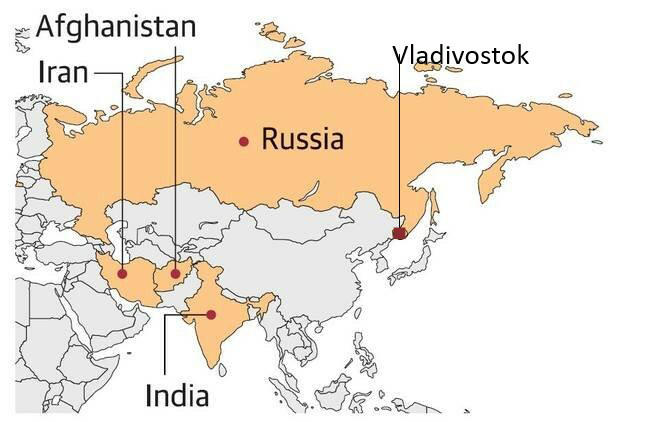 On September 8, Prime Minister Narendra Modi virtually addressed Russia’s Eastern Economic Forum 2022 held in Vladivostok. With the outbreak of the Ukraine war participation and attendance at this forum is significant messaging. While Russian President Vladimir Putin was of course in attendance, along with him were Armenian PM Nikol Pashinyan, Mongolia PM Luvsannamsrain Oyun-Erdene, Commander-in-Chief of the Armed Forces of Myanmar Min Aung Hlain, Chairman of the Standing Committee of the National People’s Congress of China Li Zhanshu, while Malaysian Prime Minister Ismail Sabri Yacob and Vietnam PM Pham Minh Tinh participated virtually.

What The PM Said:

Modi spoke at length about connectivity, the Chennai-Vladivostok Maritime Corridor, the Northern Sea Route, Indian investments in the Far East, potential of Russian participation in India’s steel industry, but most of all about firming up Indian participation in Russia’s Far Eastern region. Modi, who had participated in the EEF in 2019 as guest of honour, had announced India’s Act Far East policy then. This, he reminded in his virtual address, had become “a key pillar of the ‘Special and Privileged Strategic Partnership of India and Russia”.

A few days before that India had participated in the Vostok 2022 military games in Russia, in which some 50,000 soldiers, 140 airplanes and 60 naval ships are thought to be participating, across Siberia, the Far Eastern Federal District, the Sea of Okhotsk and the Sea of Japan. Nine countries including India, China, Mongolia, Algeria, Syria, Nicaragua, and a host of CIS countries, participated in the drills along with observers from 31 countries.  The drills like the EEC were meant to send a message that in spite of the war in Russia it was business as usual and that Russia had its allies together.

The US had expressed concern about India’s participation in the games. “The United States has concerns about any country exercising with Russia – while Russia wages an unprovoked brutal war against Ukraine. But of course, every participating country will make its own decision,” US Press Secretary Jean Pierre said.

This of course is not the first time that the US has voiced opposition to India’s position on the Ukraine crisis. India has resolutely refused to condemn Russia’s military intervention in Ukraine, instead calling repeatedly for a ceasefire and talks between the two warring parties. India also has continued to buy Russian oil and coal at heavily discounted prices, something it sees in its national interest given the spiking energy prices and its huge dependence on energy. While India had acquiesced with US wishes earlier regarding cessation of oil purchases from Iran and Venezuela, it can hardly be faulted this time around. For context, European and NATO countries continue to purchase Russian fuel supplies even after those very countries have slapped harsh sanctions on Russia.

How Others Has Reacted:

Japan, another key US ally, while condemning the war in Ukraine and even supporting the sanctions against Russia has not withdrawn its investments from Sakhalin 1 and 2 projects, and continues its energy imports from Russia. Prime Minister Fumio Kishida stated that Sakhalin-1 and Sakhalin-2 contribute to the stable supply of energy at a low cost over the long term, and that there is no change in Japan’s policy on maintaining its concessions and interests.

Seen in conjunction with India’s recent participation in the Vostok 2022 military games in Russia, this is Modi’s bold move, an announcement of India’s strategic autonomy and that it was not going to be dictated to; India would act in a manner in which it suited its national interest most.

This has been India’s steadfast policy since the outbreak of the Ukraine crisis. And not without reason. Not only does India have a special and privileged partnership with Russia, ties span almost all fields, and have been consistent with rarely any hiccup. New areas for partnerships are opening up like developing Russia’s resource rich but sparsely populated Far Eastern region, and the Arctic. Defence collaboration has never been better, with plans of expanding the partnership to third countries.

The US has also of course come around to recognizing this fact; Russia is India’s largest defence supplier and India needs this cooperation to counter Pakistan and China as alternatives are more expensive. India’s purchase of the Russian made S-400 Triumf missile system, for instance, has not invited any sanctions under the CAATSA, unlike Turkey’s similar purchase.

India, however, continues to mount a balancing act. Last month it conducted military exercises with the US in Himachal Pradesh close to the China border “Ex Vajra Prahar 2022”. Soon after though it participated in the Vostok military drills in Russia, India did not participate in the naval exercises so as not to roil Japan.

In April, Minister for External Affairs S. Jaishankar and Defence Minister Rajnath Singh participated in the fourth round of India-US 2+2 dialogue together with US Secretary of State Antony Blinken and Defense Secretary Lloyd Austin in Washington. While both Jaishankar and Singh wrapped up a meeting in the similar 2+2 format with their Japanese counterparts.

While Modi addressed the EEC virtually, he participated in an in-person summit with the QUAD leaders in Tokyo in May this year, where along with multilateral he also had bilateral meetings with all the three QUAD leaders – Australian Prime Minister Anthony Albanese, Japanese Prime Minister Fumio Kishida, and US President Joe Biden. This week he will be participating in person in the Shanghai Cooperation Organisation (SCO) summit in Samarkand where he will be meeting Russian President Vladimir Putin.  Chinese President Xi Jinping will also be present in the meeting.

Yet, while berating India for its ongoing engagement with Russia, the US itself has just abandoned its principle and announced USD 450 million for Pakistan’s F16 fleet sustainment program for “counter-terrorism” operations, a reversal of the decision of former President Donald Trump’s administration. This, along with the approval of the IMF to bail out Pakistan by disbursing $1.1 bln bail out loan, could be the pat for allowing its territory to “eliminate” Al Qaeda boss Ayman Zawahiri. This could also be subtle messaging to India, but one that can harden India’s resolve to deepen its partnership with Russia.

All About Eastern Economic Forum(EEF):

The Eastern Economic Forum was developed in 2015 by Vladimir Putin, the Russian President with its headquarter in the city Vladivostok of the country Russia. It is held at Far Eastern Federal University in Russia with the government of Russia (Roscongress Foundation) as its organiser. The prime minister of Japan as well as the president of Russia attended the session every year.

It helps in supporting the development of the economy of the Russia Far East as well as to enlarge international cooperation in the regions of Asia Pacific. It is the platform where the discussion of world issues like regional integration, country’s global challenges, development of technology as well as industries and economy.

Eastern Economic Forum 2021 theme (the 6th Eastern Economic Forum) is New Opportunities for the Far East in a changing world which was organised on 2 September, 2021 to 4 September, 2021 and it also includes programs like EEF Junior, Youth EEF as well as Far East Street. This mainly highlighted the significance of interactions between business and the state during the COVID-19 pandemic.

Indian Prime Minister Narendra Modi highlighted his ideas of strengthening the Indo-Russia relations in the single phrase, “Special and Privileged Strategic Partnership”. He also emphasises his thoughts by reiterating the phrase “Act East Policy”. The Prime Minister of India also emphasises on the sectors of pharma as well as health ones and also on the cooperation of the economy like steel, diamond, timber and many more.