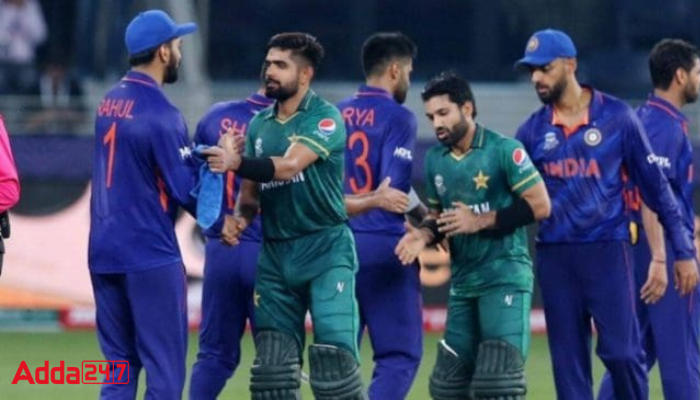 IND vs PAK T20 World Cup 2022: India won by 4 wickets against Pakistan. India won the toss and opted to bowl first. Pakistan openers were Rizwan and Babar Azam. Masood and Iftikhar Ahmed scored the highest runs from Pakistan, 52(42) and 41(34) respectively. Arshdeep and Hardik Pandya shined their way through in the IND vs PAK T20 World Cup 2022. Both of them took 3 wickets each against Pakistan. Pakistan made 159 runs in 20 overs by losing 8 wickets.

Indian openers KL Rahul and Rohit Sharma both were out on 4 runs each. However, Virat Kohli smashed the opposition with 82 runs in 53 balls being not out. Hardik Pandya made 40(37). Haris Rauf and Mohammad Nawaz took two wickets each against India. India chased the target in 20 overs making 160 with a loss of two wickets.

And fair to say, the social media was abuzz 👌 👌#TeamIndia | #T20WorldCup | #INDvPAK pic.twitter.com/DCP0W78kVu

IND vs PAK T20 World Cup 2022 Highlights: Virat Kohli Announced as the Player of the Match

Virat Kohli was announced as the player of the match. Virat Kohli has played one of the finest innings in T20 World Cup 2022 against Pakistan today. Virat Kohli came to bat at number three after Naseem Shah took KL Rahul’s wicket. Virat Kohli smashed 82 runs in 53 balls. Virat swung the bat and placed the ball out of the boundary for 6s, four times and he took six boundaries.

Virat Kohli was on 12 from 20 balls in the initial overs, then he went on smashing 70 runs in 33 balls with a strike rate of 200+ being not out. Virat Kohli says, he believed that Mohali Innings against Australia in the T20 world cup 2016, was the best innings in his career, but now, he’ll count the T20 World Cup 2022 IND vs PAK as one of the best innings he has played. He thanked Hardik Pandya who kept pushing him to carry on further.

IND vs PAK T20 World Cup 2022 Highlights: Highest Partnership for any wicket for India vs Pakistan in T20

Virat Kohli and Hardik Pandya are the real stars of the T20 World Cup 2022. The partnership of Kohli-Pandya ran hard today and made history once again. Kohli-Pandya partnership went on for 113 runs, which was interrupted when Hardik Pandya was caught out by Babar Azam and Mohammad Nawaz at 40 runs. However, Kohli alone took over the charge and went on smashing boundaries against Pakistan.