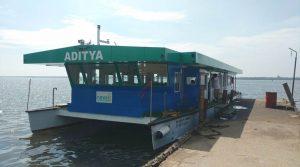 India’s first solar-powered ferry, Aditya has won the prestigious Gustave Trouve Award for Excellence in Electric Boats and Boating. The ferry was adjudged the world’s best electric boat in the category of ferries designed for paid passenger service.

The Aditya, from Navalt Boats, is a sun-powered commuter ferry that is one of the great stories of the future of electric marine propulsion. The ferry belongs to the Kerala State Water Transport Department (KSWTD) and has been plying on the Vaikkom-Thavanakkadavu route in Alappuzha district since January 2017.

The awards, handed out for the first time, is the world’s only such honour given to individuals and companies building and innovating in state-of-the-art electric boats. It was instituted this year in honour of Frenchman Gustave Trouve for his groundbreaking work in mobility based on electric transport, moving away from conventional fossil fuels. In 1881, he invented the world’s first outboard motor, connecting it to a rechargeable battery to sail a boat down the Seine river in silence.